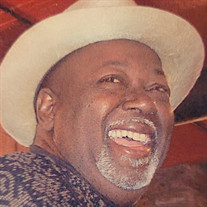 Winfred Earl Wright passed away peacefully on November 26, 2021, at his home in Rowlett, TX, surrounded by his loved ones. He was 78 years of age. Winfred was born February 11, 1943, in Cason, TX. A member of True North Church in Frisco, TX, Winfred was a man of faith and a man devoted to his family. He was married in The Colony on July 12, 1986, to Michele Stoudt and they shared 35 wonderful years. During those years, Winfred worked as foreman for Braniff Airlines, owner of T-Shirts by Sir Winfred, chauffeur with Park Avenue Limousines, and owner/operator of Unlimited Limousines & Concierge Services. His hobbies included dominoes, fishing, talking with family and friends about life, relationships and God. Winfred is survived by his loving wife: Michele Stoudt-Wright; children: Jerry Van Cunningham (Shanetta); Pamela Evans (Michael); Yolunda Hearn (Michael); Vince Edward Wright (Sherice Partee); Carla Wright; Bruce Mitchell; grandchildren: Jerry Cunningham, Jr.; Arthur Cunningham; Elvisha Jo Henry; Robert Walker (Cheree); Anthony (AD) Davis; Michael Hearn II (Justine); Myles Hearn; Myranda Roquemore (Hearn); Mylana Hearn; Marshall Hearn; Latasha Cason (Wright); Timothy Ford III; Victoria Wilson; Yvonne Williams; Jennifer Ellis; VJ Wright; Jerome Mitchell (Ashley); Patrick Mitchell (Ashley); great-grandchildren: Alicia Cunningham; Jerry Cunningham III; Cabria Cunningham; Triston Cunningham; Chelsi Cunningham; Austin Cunningham; Londyn Cunningham; Autumn Cunningham; Aniya Walker; Jacory Walker; Jacoby Walker; Jaylen Walker, Javon Walker, Jade Jones, Emory Jones; Phoenix Summerville; Jaycee Hearn; (Coming soon Roquemore); Promise Ford; Timothy Ford IV; (Victoria’s 4 daughters); Madison Ellis; Allison Ellis: V3 Wright; Vermeer Wright; Logan Mitchell; Shae Mitchell; brother: King Edward Wright; cousins: Pat Brent (Donald); Deborah Ann Gholston; Charles Walker and Gloria Walker. He was preceded in death by daughter Darla Wright Christian. As many well know, Winfred was a different person than anyone else of whom I have ever known and he lived life completely on his own terms and left us in the same manner. I was with him during his short parting journey this week most of the time. During his final moments I sang this song to him, written by our pastor, Glenn Feehan: “I see the Lord Seated on the throne. Exalted And the train of his robe Fills the temple with G L O R Y And the whole earth is filled, And the whole earth is filled, With his Glory. And we sing Holy, Holy, Holy, Holy Holy is the Lord (We sing Holy) Holy, Holy, Holy, Holy Holy is the Lord of Lords:” The peace of God was ever so present and he took his last breath with hand in mine. We do miss him already, but we realize we have a gift of life on this earth. With our Lord and Savior, Jesus Christ, we have the hope of Glory that includes as Paul says in Romans, both insiders and outsiders. It will disappoint many, but for those who truly knew Winfred, you will understand the following: He chose not to have a funeral or viewing. He has said the dead are gone. What I have learned in the last few days, is that he has left us an incredible legacy to those who will take time to write it down and share it. The pain is there. It does hurt. Revelations 12:11 states, “And they overcame by the blood of the Lamb [Jesus], and by the word of their testimony…” We ask you to do is this: Write down what Winfred has meant to you, some words of wisdom, a short saying. Rest Haven will have a page where you can share your thoughts. YOU are his legacy. If you do this, I will collect them and, in the days ahead I will compile something that will help us to process his parting here from this earth. His work here is done and he is up with the great cloud of witnesses cheering us on. We can do this. With God, we can do this. Thank you for loving us. Thank you for reaching out. Thank you for the meals, the hugs and prayers. We love you!

Winfred Earl Wright passed away peacefully on November 26, 2021, at his home in Rowlett, TX, surrounded by his loved ones. He was 78 years of age. Winfred was born February 11, 1943, in Cason, TX. A member of True North Church in Frisco, TX,... View Obituary & Service Information

The family of Winfred Earl Wright created this Life Tributes page to make it easy to share your memories.