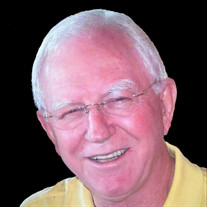 Wilton Royce Bodkin, of Royse City, quietly passed away November 18, 2021, at the age of 80. He was born April 9, 1941, in Littlefield, Texas, to Wilton Roland and Hester Mae Bodkin. Royce is survived by his three daughters, Heather Thornton and husband, Michael; Jennifer Rogers and husband, David; and Stacy Robinson and husband, Douglas; grandsons, Colin Thornton, Joshua Thornton, Samuel Robinson, and Daniel Robinson; brothers, Wayne Bodkin and wife, Patricia; Michael Bodkin and wife, Barbara; and Patrick Bodkin. He was preceded in death by his loving wife of 58 years, Patricia, and his parents. Royce grew up on his family farm in West Texas where he learned to tinker and fix every appliance and car he owned. He was always happiest when he had a project to do, so his friends and family kept him very busy. He graduated from Olton High School in 1959 as the student council president. He was a three-sport letterman and captain of his football and track teams. He represented his track team in the UIL state competition in 1958 in the 440-yard relay. He was also inducted into his high school’s Athlete Hall of Fame in 1988. Royce graduated from Texas A&M College in 1963 and wore his Aggie ring proudly. He earned his MBA at Texas Tech University. He began his career in Detroit, Michigan, at the Ford Motor Co. before settling back home in Texas, where he had a long career with Texas Instruments and Raytheon Corporation. Royce was as an avid licensed amateur Ham Radio Operator and held the call sign WB5LIK. He was passionate about his hobby and always made sure to attend the annual ham radio festival when possible. He helped assemble numerous radio towers over the years, with no concern or fear for the height. Growing up, his girls enjoyed listening to him on his radio, talking to people all over the world or using Morse code. We will always remember the sound of his voice on the radio - “This is WB5LIK.” Royce was a strong man, in both body and spirit. He taught his children the importance of keeping your word and always doing your best. His endurance and ability to bounce back during his final years was a testament to his strength and stubbornness. He was a fighter, and everyone who knew him well knew that about him. He was greatly loved and respected and is already incredibly missed. Until we meet again, this is WB5LIK signing off. Graveside services will be held at 11:00am Wednesday, November 24, 2021 at Rest Haven Memorial Park with Pastor Paul Jacobs officiating. Catering to follow in The Gathering, Rest Haven Funeral Home. In lieu of flowers, please consider a donation to the Christopher and Dana Reeve Foundation or the American Heart Association.

Wilton Royce Bodkin, of Royse City, quietly passed away November 18, 2021, at the age of 80. He was born April 9, 1941, in Littlefield, Texas, to Wilton Roland and Hester Mae Bodkin. Royce is survived by his three daughters, Heather Thornton... View Obituary & Service Information

The family of Wilton Royce Bodkin created this Life Tributes page to make it easy to share your memories.