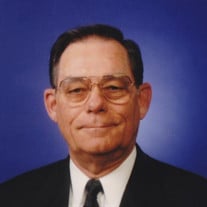 William Thomas “Bill” Satterwhite, age 87 of Rockwall, TX, passed away December 25, 2021. He was born December 27, 1933, in Baytown, TX, to Troy Louis and Gertrude Maurine (Hunt) Satterwhite. Bill earned a BA Degree from Baylor University in 1956, followed by a law degree from Baylor School of Law in 1958. He loved baseball and was an excellent player, even receiving an offer to play for the St. Louis Cardinals. He proudly served his country in the Texas National Guard and was elevated to active duty during the Berlin Crisis from 1961 to 1962. Bill married Neita Faye Erisman from Ennis, TX, on March 2, 1957. Bill operated a private law practice in Ennis, TX, from 1958 to 1966, then joined Lone Star Gas Company’s legal department in 1966. He was promoted to Senior Attorney in 1967, to Assistant General Counsel in 1970 and named Sr. Vice President, General Counsel and Chief Legal Officer when Lone Star Gas became ENSERCH Corporation in 1975. He was elected Executive Vice President of Texas Utilities Company (now TXU) when ENSERCH Corp. merged with TXU in 1997. Bill retired from TXU on March 1, 1997. Bill was a brilliant and active attorney, serving on the Board of Directors of Lone Star Gas Company and on the Board of Directors of ENSERCH Exploration. He also served in the Texas House of Representatives for Ellis and Hill Counties for two sessions from 1963 to 1966. Bill was admitted to practice before the U.S. Supreme Court in 1977 and was appointed by Texas Governor Bill Clements to the office of Chairman, Texas Board of Land Surveying from 1979-1985. Bill held many leadership and membership positions in various legal and industry associations, including Director of the Southwestern Legal Foundation and Chairman of the National Gas Group. Bill was a member of the Texas and Dallas County Bar Associations, a charter member of the Rockwall County Bar Association, and a Paul Harris Fellow in Rotary International. In 2006, Bill was honored with a “Lifetime Achievement Award” in the Dallas Business Journal’s “Best Corporate Counsel Awards.” He also served on the Planning and Zoning Commission of the City of Heath, TX. Bill was a caring and compassionate community leader and a man of great faith. He was active in the Baptist church throughout his adult life, serving as Chairman of the Deacons, First Baptist Church, Rockwall, and as the teacher of a Sunday morning Men's Bible Class at Lake Pointe Church, Rockwall, where he and Neita enjoyed the close fellowship of an adult Bible Class for over 20 years. He also completed a five-year study of the Bible through the weekly classes of Bible Study Fellowship. Bill was a fun-loving husband, parent and grandfather whose ideal, perfect day would include, if possible, a round of golf, a couple of hours of fishing, a Dallas Cowboy game on television followed by a Texas Rangers game, time spent with his family, a Whataburger and fries, a movie double-feature (“Patton” and “Monty Python and the Search for the Holy Grail”) and would conclude with a ridiculously large bowl of Blue Bell Homemade Vanilla ice cream topped with the chocolate sauce recipe that has been in Neita’s family for at least four generations. He is survived by his beloved wife of 64 years: Neita Faye Satterwhite of Rockwall, TX; children: Susan Maureen Satterwhite and husband Keith Howlett of Heath, TX, William Thomas Satterwhite, Jr. and wife Linda Kay of Plano, TX, Sharon Louise Satterwhite of Rockwall, TX, and Samuel Douglas Ross Satterwhite and wife Kate of Wylie, TX. He also took great pride in his ten grandchildren and two great-grandchildren. A celebration of Bill’s life will be held at 2:00pm, Thursday, December 30, 2021, at Lakepointe Church – The Bridge, 701 East I-30, Rockwall, TX. At the family's request, masks are encouraged and will be made available at the service.

The family of William Thomas "Bill" Satterwhite created this Life Tributes page to make it easy to share your memories.