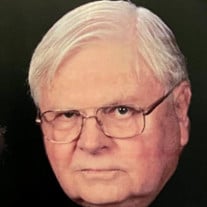 Victor Val Ramsey passed away peacefully on December 11, 2021. He was born in Dallas, TX on May 20, 1938 to Victor Virgil Ramsey and Maxine Wynn Ramsey. He was raised in Garland, TX where he trusted Christ as his Savior in his early teens. Victor and his parents and sisters are Charter Members of Eastern Hill Baptist Church, where he served faithfully for the rest of his life. Victor graduated from Garland High School in 1958. He was active in FFA and raised Champion Hampshire and Suffolk Sheep. He attended East Texas State University after graduating. After graduation he married his High School sweetheart, Laura Ann Jackson. Victor and Ann were happily married for 52 years until her death in 2012. . They enjoyed traveling, water-skiing, and teaching Sunday School together. They spent much of their early marriage on the lake and loved family trips to Lake of the Pines. Victor and Ann also worked together every day at their Custom Frame Shop, Mr. Js. For over 50 years they served the Richardson area where they had loyal customers who became life-long friends. Victor was an animal lover, and was seldom seen without a canine companion at his side. Ann and Victor took their Chinese Pugs with them to work every day where they greeted customers as they entered the store. Victor’s daughters fondly remember the Christmases when Ann would put him in charge of buying the presents. They received fishing poles, motorcycles and horses when he was in charge of the gifts! The family spent many happy hours together on horseback and many cold nights out looking for horses that escaped the fence! Victor was naturally good natured and compassionate. He always found jobs for those who needed one, always lent a hand to someone in need. He had a fierce sense of humor and was an exquisite storyteller. He entertained his young daughters with hours of stories that he concocted about the “Mighty Woodpecker” and fascinated his grandchildren with tales of the “Battle of Garland”. He was constantly teasing, and was always ready with a quip or a saying which is a trait we know he inherited from his father. His softball teams at Eastern Hills brought him so much joy as a player, but most of all as a coach. He spent many evenings making lineups and trying to find the perfect combination of players. His efforts resulted in many winning teams, with one team advancing to the National Finals. His players have kept in touch with him over the years and he always enjoyed hearing from them. In his later years, Victor enjoyed spending time at his farm in Dodd City, TX, where he enjoyed watching birds and feeding “his” wild rabbits. Victor loved baseball and was always excited when spring training arrived. Victor was preceded in death by his parents, Victor Virgil Ramsey and Maxine Wynn Ramsey and his devoted wife Laura Ann Jackson Ramsey. He is survived by his daughters, Jana Ramsey, Jodi Ramsey, Jennifer Ramsey Clements and her husband, Andy Clements; his grand-children, Jessica Rodriquez Boland and her husband Patrick, Kyle Ramsey Clements, Kendall Ann Clements, Laura Allison Fidler, and Samuel Victor Bowers; his great-grandchildren, Brayden Michael Boland and Ronan Victor-Val Boland; his loving sisters and their husbands, Judy and Jerry Groves, Jane and Kenneth Post; and many cousins, nieces and nephews. In lieu of flowers the family requests donations be made to The Friendship House, or Sharing Life Community Outreach. The Friendship House: https://www.fbcgarland.org/friendship-house/ Sharing Life: http://www.sharinglifeoutreach.org

Victor Val Ramsey passed away peacefully on December 11, 2021. He was born in Dallas, TX on May 20, 1938 to Victor Virgil Ramsey and Maxine Wynn Ramsey. He was raised in Garland, TX where he trusted Christ as his Savior in his early teens. Victor... View Obituary & Service Information

The family of Victor Val Ramsey Jr created this Life Tributes page to make it easy to share your memories.