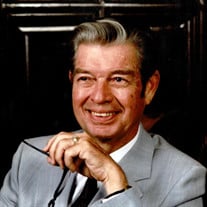 Thomas E. Montgomery, 95, passed from this life on Wednesday, December 8, 2020, in Sachse, TX. Tom was born June 9, 1925, in Sylvan Grove, KS, the son of Tom and Cecil Montgomery. Tom married the love of his life, Joan L. Divine, on September 29, 1957, in Marshall, MI. He grew up in the Great Depression era, along with his three sisters in Midland, MI. He took an early liking to automobiles and enjoyed driving and restoring classic and antique cars for over 70 years. His particular love of the Model A Ford led Tom and Joan on dozens of car tours, club meetings, and events annually over the decades. In August of 1943, at 18, he was drafted into World War II and served honorably in the United States Navy Seabees in various functions at a military servicing unit in Trinidad, the British West Indies. Upon completing his military service, he returned to the United States, completed his education, and began a long career with State Farm Insurance Company before retiring in 1989. Having moved to Midland, TX, with his family, Tom and Joan enjoyed over three decades of active retirement travels, social clubs, and church attendance before moving to Rockwall upon the birth of his granddaughter. Tom and Joan were regular members of First Baptist Church and enjoyed the fellowship of their active Sunday school group. When not busy with car clubs, YMCA activities, or church, they traveled extensively in their RV throughout the United States, Canada, Mexico, and Europe. Tom was preceded in death by his parents and his sister: Doris Dyer. He is survived by his wife: Joan Lee Montgomery of Los Angeles, CA; two sisters: Lois Host of Grand Rapids, MI, and Anita Chase of Baton Rouge, LA; son: Paul Thomas Montgomery and wife Dava; step-grandchildren: Emma and Marshall; daughter: Catherine Lee Tompkins and husband Bradley; and granddaughter: Nicole Lee Tompkins. Please join his family in a celebration of life service at 2:00pm, Friday, August 27, 2021, at Reflections at Rest Haven Funeral Home, Rockwall, TX. The service will also be live-streamed; please go to www.oneroomstreaming.com and click on the "watch your service" icon and use Event ID: resthavenrockwall and password: TPZLWZ

The family of Thomas Ellis Montgomery created this Life Tributes page to make it easy to share your memories.

Thomas E. Montgomery, 95, passed from this life on Wednesday,...