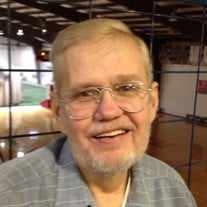 Terry Dwain Sanderson, 67, of Mesquite, Texas, passed from this life July 25, 2021. Terry was born May 12, 1954, in Dallas, TX, to Harry (Edd) Sanderson and Bobbie Ruth (Turner) Sanderson. He worked for the U.S. Postal Service for 35 years, and before that Borden’s Milk and EB Motts. He grew up in Mesquite, TX, and attended Mesquite High School. Terry was a man of God, who loved the Lord with all his heart. He loved to listen to Christian music and read his Bible. He was always there to lend a helping hand or lend an ear, if you needed to talk. He loved his family with all his heart and was a good father. He liked to work on cars, which was good, because especially growing up, there were a lot of problems with the family cars. Many a day and night he would be working in the cold to repair someone’s car so they could get to work the next day. This was probably after receiving the distress call from someone that they needed a tow. Terry will be missed, but he is with the Lord now and all the pain he was in is gone. We will miss him. He was a good husband, dad, grandfather, brother and friend. He is survived by his loving wife of 48 years: Terri Ann (Yarborough) Sanderson; children: Travis Sanderson and Theresa Sanderson; grandson: Kaleb Sanderson; siblings: Roger Sanderson, Sherry Sanderson and Kathy Hammer; and brother-in-law: Howard Yarborough. Terry was preceded in death by his parents: Harry and Bobbie Sanderson; and sister: Marsha Sanderson. Funeral services will be held at 1:00pm, Monday, August 2, 2021, at Reflections at Rest Haven Funeral Home–Rockwall Location with Michael Taylor officiating. Interment will follow in Grove Hill Memorial Park, 4118 Samuell Blvd, Dallas. A gathering of friends and loved ones will be held Monday morning at the funeral home, prior to the service, beginning at 11:00am. The service will also be live streamed; please go to www.oneroomstreaming.com and click on "watch your service" icon and use Event ID: resthavenrockwall and password: GZMCRB

The family of Terry Dwain Sanderson created this Life Tributes page to make it easy to share your memories.

Terry Dwain Sanderson, 67, of Mesquite, Texas, passed from this...