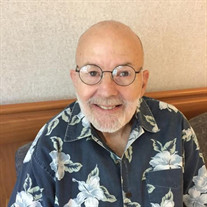 Terry Glen Nelson quietly drifted away in the early evening hours on June 3, 2021. He was 72 years old. Terry was born in Dallas on June 8, 1948, to Ted Nelson and Sherry Lee Fite. He had one younger half-brother, Robert Maxvill, one younger half-sister, Sandy Stillo, and many cousins, some of whom were like siblings to him. Upon being discharged from the U.S. Navy, Terry took a job at the VA Medical Center in Dallas where he met Karen Henderson. They married on September 16, 1978. He adored his “mamacita,” a term of endearment he assigned to Karen that was often accompanied by a sly smile between the two of them. They shared a quick wit and penchant for sarcasm and satire. They had two beautiful children, Morgan and Travis. He was so very proud of his children. As a stay-at-home dad, Terry provided an amazing childhood for his children. He supported each of their endeavors and was present for every function. He cared for, nurtured, and loved them unconditionally. In his passionate moments, he argued, yelled, laughed, and cried. He also taught and inspired, always open to any topic of discussion. He could be incredibly stubborn and just as kind, gentle, and loving. He truly loved being a daddy. Terry loved unconditionally. He was always there for those he loved, in good times and bad, with a gentleness and kindness that was comforting and reassuring. He strived always to be a better person and to bring a smile to others. At the VA Hospital in Dallas where he had made many friends over the years, he was a bit of a celebrity. Always quick with a compliment or a kind gesture, he made others feel special and appreciated. He seemed to connect with children in ways many adults don’t, making him the “cool” brother and uncle. He loved dogs and cats and had many, many pets over the years. Terry enjoyed cigars, pipes, strong coffee, music of all genres, quality stereos with a good set of speakers, literature, classic cars, Turner Classic Movies, Adult Swim and South Park, Red Lobster and El Fenix, Marie Calendar pot pies, Ben and Jerry's ice cream, SMU, his Mini Cooper, pearl snap shirts, cowboy boots, “spiffy” hats, St. Augustine, FL, the U.S. Navy and the VA, the Texas Rangers, the Dallas Cowboys, the Dallas Stars, old-fashioned hamburgers and Tex-Mex enchiladas. Terry studied English Literature at Southern Methodist University in Dallas. As an introvert, Terry relished his alone time. Sitting in his favorite chair with his pipe, he could read all night. He read everything from Shakespeare to the Merck Manual. He knew something about everything. His intellect, quick wit, and unique perspective on life, along with his (sometimes) dark sense of humor, made for deep and interesting conversations. His library was rivaled only by his record collection which spanned decades and genres. He loved jazz, folk music, blues, country music, and rock-and-roll. He was quite a critic of music that didn’t have depth, complexity or evoke emotion. As with literature, he connected on a deep level with music and could spend hours alone with his vinyl collection. He kept up with newer music but preferred listening to KZPS where they played the music of his youth. He enjoyed listening to Bo and Jim in the morning, even as they moved from one station to the next. They made him laugh with their witty satire and sarcasm. He will be remembered as cool, kind, gentle, special, accepting, intelligent, smart, witty, nurturing, loving, sensitive, thoughtful, eccentric, and funny. He fought many battles with his mental and physical health, but these things about him were always present. At his core, he was simply a gentle soul who cared deeply about his family, friends, and our country. His last years were spent at Grand Brook Memory Care of Garland where they took wonderful care of him and treated him like family. He made many friends and was quite popular with the ladies who all considered themselves to be his “girlfriends.” The family is so grateful for the loving care they provided from the beginning right up to his last breath. Terry leaves behind his daughter, Morgan, grandson, Ethan, and granddaughter, Ava; his son, Travis and wife Mandy, granddaughters Alexia Ramberg, Lilian Gaines, Elizabeth Nelson, and grandson, Trason Nelson; his brother Robert and sister Sandy; nieces Katrina and Kimberly and nephews Robbie and Taylor; two uncles and many, many cousins and friends. Godspeed, Terry. You will be dearly missed, but never forgotten. Rest easy, it’s going to be ok. Terry desired to donate his body to UT Southwestern, but due to medical circumstances was unable to do so. If you are so inclined, his family asks for donations to UT Southwestern in tribute to him and his unending passion for education. Contributions may be mailed to: UT Southwestern Medical Center Office of Development P.O. Box 910888 Dallas, TX 75390-0888 Alternatively, donations may be made online at https://engage.utsouthwestern.edu/donate-now. Please specify that the donation is intended to support the Willed Body Program. A memorial gathering for close family and friends will be scheduled once his cremains are received. No date has been set for the memorial gathering. Contact Sandy Stillo at 214-718-8341 for more information if you would like to attend.

Terry Glen Nelson quietly drifted away in the early evening hours on June 3, 2021. He was 72 years old. Terry was born in Dallas on June 8, 1948, to Ted Nelson and Sherry Lee Fite. He had one younger half-brother, Robert Maxvill, one younger... View Obituary & Service Information

The family of Terry Glen Nelson created this Life Tributes page to make it easy to share your memories.