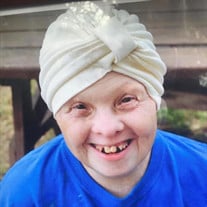 Let’s start at the very beginning. Teresa was born December 18, 1960 to Frank and Dorothy Fazio. She was the third daughter of the couple which positioned her into the prized middle child slot after the birth of her two brothers within the next four and a half years. Teresa was always surrounded by her siblings: Frances, Patty, Jerry, and Tony, an ideal situation for Teresa as she was diagnosed with Down Syndrome at birth. Her parents were advised to leave her in an institution; if you knew Teresa and her family, you knew that this was not how her story unfolded. Dorothy and Frank sought the best opportunities for Teresa available: at three years, she began a day program at Angels, Incorporated, then progressed to the Notre Dame School of Dallas, which continues to serve students with developmental disabilities, from which she graduated in 1982. Sister Rose’s educational philosophy inspired opportunities for Teresa at Notre Dame that would not have been available to her otherwise; Teresa began her studies in American Sign Language at Notre Dame which she would continue for two semesters in the SMU Adult Education program. Teresa’s Notre Dame connections gave her best friends for life – Roseanne, Beth, Margo – and gave Dorothy a valuable support network of other mothers of Notre Dame students. After graduation, Teresa returned to the site of Angels, Incorporated which evolved into a dayhab/workshop which was a blessing to Dorothy who recognized it as nearby safe place for Teresa that would allow Teresa to continue to socialize and maintain a daily routine. Teresa attended Dallas Center, Inc. until lockdown due to the Covid-19 virus. Teresa was surrounded and supported by Gail, Barbara, Jeri, Bessie, Diana, Lorry, Tammy, Savarion, and others. Of course, there were breaks from the daily routine that included attending the Superbowl parades for the Dallas Cowboys, performances of the Dallas Summer Musicals, trips to Colorado, Hawaii, Disney World, Branson, Red River, Alaska, the East Coast and Canada to observe fall foliage, and rarely passing up a visit to a Dallas mall to meet celebrities like John Stamos, David Copperfield, Mikhail Baryshnikov, Liza Minnelli, and Ron Chapman. Thanks to Dorothy and her siblings, Teresa enjoyed additional activity sessions and classes in line dancing, flower arranging and, as an accomplished artist, Teresa, under the guidance of two talented teachers, designed and painted porcelain dolls, many of which won ribbons at the State Fair of Texas. The public never realized that these elaborate and beautiful dolls were the creations of a special someone with special needs and talents. And then there was Teresa’s heaven on earth: Camp Soroptimist which later became Camp Summit. For over thirty years, Teresa was a devoted camper, often saying that it was her favorite place on Earth. “Good food!” Teresa presided over the karaoke evenings singing her favorites songs from The Sound of Music, rode horses even after her neck surgery in 2017, declined to participate in the ropes course although she could be persuaded to watch others, and found that arts and crafts were her favorite things. The dance on the last evening of the camp session was always a highlight for her. It was through the generosity and kindness of Lisa, Carla, Amanda, LuLu, Liz, Dawn, Vance, Cody, Aaron, Felicia, Briwana, Blake, Jamie and so, so many more counselors and staff that Teresa carried loving memories of Camp Summit from one session to the next. Dorothy and Frank were blessed to have family and friends who became family to give Teresa her best life possible: the Wiley Family, the Fazio Family, the Koetter Family, the Constantine Family, the Winikates Family, Dorothy’s friends from her career in nursing who became more than co-workers, loving neighbors from Dallas and Rowlett who watched over Teresa, and the friends of her siblings who still sent Teresa birthday greetings and got high fives from her. In February of 2020, Community Homes for Adults Incorporated (CHAI) welcomed Teresa into one of its group homes; Teresa enjoyed the company of a whole new set of friends. Frances, Jerry, and Tony continued caring for Teresa, as circumstances allowed, during the Covid lockdown. Teresa is survived by Gerard Fazio (Claudia and Dawson) who took her on annual Christmas shopping trips, made sure she attended Camp Summit’s Boots and Bandanas fundraisers and its annual golf tournaments, as well as graciously hosting Teresa’s birthday dinners at Royal Oaks Country Club; Anthony Fazio who got Teresa on the bus for her daily trips to her dayhab, saw that she got trips to the Dallas Arboretum and other treats, especially her favorite Subway sandwiches; as well as her sister Frances (Chuck and Charlie) who tried her best to keep up with her younger sister; Teresa was faster than she looked. Teresa passed away peacefully on April 8, 2021. As flowers are not permitted at the Sacred Heart Cemetery Chapel, if you wish to commemorate Teresa, please consider a donation to Camp Summit which Teresa considered her happiest place on Earth.

Let&#8217;s start at the very beginning. Teresa was born December 18, 1960 to Frank and Dorothy Fazio. She was the third daughter of the couple which positioned her into the prized middle child slot after the birth of her two brothers within... View Obituary & Service Information

The family of Teresa Fazio created this Life Tributes page to make it easy to share your memories.

Let’s start at the very beginning. Teresa was born December 18,...