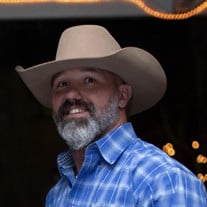 Stoney Lynn Polk, age 38, of Bluff Dale, TX passed away on December 27, 2021. He was born on July 19, 1983 in Garland, TX to Rickey Lynn Polk and Tonja Leann (Rhodes) Polk. Stoney proudly served his country in the United States Air Force as a fire fighter including deployment to Afghanistan and Iraq. Stoney was a man who never knew a stranger and was eager to build friendships with any person he met – even at the local gas station. His friends will remember him as the witty prankster who would do anything for anybody. He would give the shirt off his back or the last penny in his bank account to someone who needed it along with his giant signature smile. As an Entrepreneur, Stoney owned a successful business and was well known as a reliable and trustworthy “jack-of-all-trades”. He learned many of his problem-solving skills from his brothers and father who were frequently creating unique solutions with the tools they had. His family will remember him as the truck loving and karaoke singing man who always had the radio on. Stoney was known for making someone laugh even during their roughest day. He loved to make you smile. His children will remember him as a Dad who loved to be present. They will have memories of him making Saturday morning breakfast burritos and being the loudest one cheering them on in the stands. Lazy day snuggles in bed, one-on-one days spent with each kid, and rides on the “donkey” will always be some of their favorite memories. To say his presence will be missed by all is truly an understatement. Stoney is survived by his wife of 8 years: Nicole Polk; children: Brylen, Emerson, Teagan, and Cheston; brothers: Dusty Polk, and Baley Polk and wife Brooke; nieces and nephews: Landon, Avery, Preston, Harper, Kiairra, Everley, Presley, Madilyn, Bly, and Beck; his "Mee Maw Polk": Micki Bassinger; brothers-in-law: Russell Morganstean and wife Destiny, and Travis and Taylor Harris; parents -in-law: Teresa and Chris Morganstean; and a host of aunts, uncles, and cousins. He was preceded in death by his parents, and brothers: Casey Polk and Ricky Polk. Funeral services will be held 1:00 PM Thursday, January 6, 2022, at First United Methodist Church of Rockwall. Interment will follow in Rockwall Memorial Cemetery. A gathering of family and friends will take place from 6:00 to 8:00 pm Wednesday, January 5, 2022, at Rest Haven Funeral Home-Royse City Location.

The family of Stoney Lynn Polk created this Life Tributes page to make it easy to share your memories.