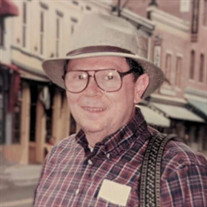 Stephen Turek was born November 18, 1941, in St. Louis, Missouri. He was the only child of Helen and Romann (Raymond) Turek. A graduate of Beaumont High School in St. Louis, Steve attended the University of Missouri at Columbia, where he earned his bachelor’s, master’s and PhD degrees in math education. Steve had a varied career. He began as a teacher of math and statistics in high school and college. As computers gained in popularity and importance, he was hired by Kansas City Institute of Technology to teach computer programming. He always said he was about two chapters ahead of his students in that first class since there had been no such thing as a degree in computer science or information technology in those days. Over the years he was employed as a computer programmer by a variety of companies in Oklahoma and Missouri. He retired from Hallmark Cards in Kansas City in 1994 after sixteen years of service. Thereafter he served as adjunct professor of statistics and math for two local Kansas City colleges. He moved to Rockwall, Texas, in 2007 when his wife’s employer transferred her to Dallas. Steve’s first marriage of 25 years to Tarvi Ann Hermann ended with her death from brain cancer. He met his second wife, Zoe Ann Holmes, also widowed from her first marriage, through a personal ad in a local Kansas City newspaper. They married in October 1992. Apart from his interest in all things computer related, Steve was an avid sports fan. Although he did not play sports himself, he was an avid fan of Mizzou football. He also enthusiastically supported the Kansas City Chiefs football team and the St. Louis Cardinals and Kansas City Royals baseball teams. He loved to talk football with his sons-in-law and friends. Steve was an active member of Holy Trinity by the Lake Episcopal Church with his wife Zoe, where they enjoyed participating together in fellowship activities. Steve is survived by wife Zoe Holmes, daughters Mary-Celeste Slusser and Libby Juárez, sons-in-law Adam Juárez and Eric Slusser, and grandchildren Alex and Zoe Juárez. A celebration of Stephen's life will take place at 1:00pm Friday, April 1, 2022, at Holy Trinity Episcopal Church, 1524 Smirl Drive, Heath, TX.

Stephen Turek was born November 18, 1941, in St. Louis, Missouri. He was the only child of Helen and Romann (Raymond) Turek. A graduate of Beaumont High School in St. Louis, Steve attended the University of Missouri at Columbia, where he earned... View Obituary & Service Information

The family of Stephen Turek created this Life Tributes page to make it easy to share your memories.