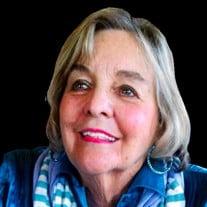 The Life of Shirley Ann Shoquist Shirley Ann (Smith) Shoquist, 84, a Rockwall resident since 1976, passed away from this life on June 28, 2021, and into the arms of her loving Lord and Savior. Absolutely nothing was as important to Shirley as her loving relationship with Jesus Christ, her husband Bruce, her children, grandchildren, great-grandchildren, former students, and her dear close friends. Shirley was born to Maurice D. Smith and Alpha Amanda (Torres) Smith, in Harrisburg, Pennsylvania, on October 1, 1936. Shirley is survived by her loving husband, Bruce Shoquist, children Sheri Franza, and husband Ed, Steve Shoquist, and wife Kelley, Stacy Weishaar, and husband Durand, and Shannon Cannon, and husband Thure. Her adoring grandchildren; Ryan Franza, and wife Brittany, Todd Franza, and wife Katie, Cody Weishaar, and wife Kaylea, Katie Weishaar, Macall McKenzie, and husband David, Corbin Shoquist, Knox Cannon, and Nash Cannon. Precious great-grandchildren; Cru Franza, Kase Franza, Coen Franza, Cole Franza, and Caroline McKenzie. Sisters include Barbara Davis, Carol Bush, sister-in-law Claire Smith, Brother-in-law Dick Shoquist, and wife Jean Marie. Nieces and nephews; Lisa Hilderbrand, Amy Lackey, Dawson Smith, Debbie Davis, Jeffrey Bush, Jennifer Turner, Charlene Shoquist, and a host of other loved ones and former students who will miss her dearly. Shirley was preceded in death by her parents, Alpha and Maurice Smith, and her brother Dale Smith. Shirley graduated from John Harris High School in 1954, attended William and Mary College her freshman year, and transferred to Denison University in Granville, Ohio, where she majored in English and Public Speaking and graduated on the Dean’s List in 1958. It was also at Denison University where she met and married the love of her life, Bruce Shoquist, on December 19, 1958. As they held hands tightly and leaned on each other, they were transferred to a Marine Corps Base in Camp Lejeune, North Carolina, where Sheri and Steve were born. In 1962, Bruce was deployed to Cuba, and Shirley took their two young children to Dallas to live with her parents and teach school until Bruce returned in 1963. They bought a beautiful little home on Cinderella Lane in Dallas, and Stacy and Shannon were born. Life was simple, fun, and forever memorable. In 1976, the Shoquist Family moved to Rockwall, and Shirley got busy right away. She was the founding member of Reviews, Reviews Book Club, a member of the Rockwall Literary Club, Rockwall Supper Club, and Aspasians. Shirley and Bruce and their four children became active members of Heath Baptist Church and were among some of the first families of Lakepointe Church. She began her twenty-year career as an educator at Rockwall High School, which she said was some of the most enjoyable and fulfilling years of her life. She taught English and started the Speech and Drama Department for RHS. She was the U.I.L. Coordinator, coaching persuasive and informative speaking, Lincoln-Douglas Debates, Cross-Examination Debate, poetry, prose, and current events. Her competitive teams were outstanding at every tournament and always left with a 1st Place trophy, and sometimes winning the entire tournament in every category. Every year, ‘Mrs. Shoquist’ had two or more students advance to the State tournament in Austin, which gave Rockwall great recognition in the field of U.I.L. In 1994, Shirley was nominated by her students as a candidate to receive the national award, "The Best Teachers in America Selected by the Best Students", based on her merit as a teacher who "made a difference" in the lives of her students. She won the award and was acknowledged for her excellence as a distinguished educator by Who's Who Among American Teachers. In 1996, she retired from Rockwall High School and continued teaching public speaking at Richland Junior College for a few years, while volunteering at the Pregnancy Resource Center and the Lakepointe Church Newcomer's Group. She was an active member of the Retired Teachers Association and a Boutique Lady at Stein Mart. She spent more than thirty-five years traveling the world with dear friends and family. She loved snow skiing, boating, trips to Cabo, Orange Beach, Alaska, Rome, hot air ballooning, and cruises all over the world. She loved hosting weekly Bible Study in her home and always welcomed as many who would come to Sunday dinners after church. Shirley used every facet of her life to minister to others and bring them to the Lord. She has left a one-of-a-kind legacy which will be remembered forever. “At the age of 80, I have enjoyed a very full, interesting, and challenging life, and I feel very blessed. My family and my teaching are the highlights of my life, and if I was to do it over, I would not change a thing. I’m a very fortunate lady having lived a very happy and full life.” Funeral services are to be held on Friday, July 9, 2021, at 2:00 PM, at The Bridge at LakePointe church, in Rockwall, Texas, with Pastor Steve Stroope officiating. A celebration of Shirley and luncheon will follow the service. A gathering of friends and loved ones will be held the evening prior, Thursday, July 8, 2021, at Rest Haven Funeral Home in Rockwall, Texas, from 5:00 PM to 7:00 PM.

The Life of Shirley Ann Shoquist Shirley Ann (Smith) Shoquist, 84, a Rockwall resident since 1976, passed away from this life on June 28, 2021, and into the arms of her loving Lord and Savior. Absolutely nothing was as important to Shirley... View Obituary & Service Information

The family of Shirley Ann (Smith) Shoquist created this Life Tributes page to make it easy to share your memories.

The Life of Shirley Ann Shoquist