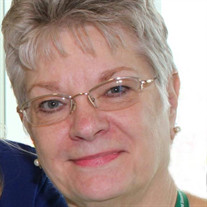 Sandy's family invites you to join the service by clicking this Live Stream link: https://youtu.be/fwaJ8NV4xRw Sandra (Sandy) Clayton Rudd of Mesquite, Texas, passed away on May 6, 2022. She was born on September 28, 1945 in Dallas, Texas to Ira Chester Clayton and Dorothy Eileen Burnett. On February 17, 1967 she fell in love with and married the boy next door, Randall Rudd. They moved to Mesquite, Texas in 1967 and raised three children until he passed away February 14, 1998. Sandy was a homemaker until her children were all in high school. Sandy went to work for The Southland Corporation (better known today as 7-Eleven, Inc.) at the corporate office in Dallas, Texas on January 26, 1982. She worked her way up to be the Department Manager over Interiors and Mail Services for twenty-nine and a half years. She took pride in her work and loved her work family like her own (many in fact, were actual family members). Sandy was full of selfless compassion and served as a care giver to many colleagues over the years. After retiring on June 30, 2011, Sandy filled her retirement days with her love for quilting, which she learned from and shared with her sister Pat Hicks. She enjoyed her quilting friends, quilt retreats, and being a part of “The Material Girls;” as well as making many quilts, with and for, her family and friends. Her greatest love was for her grandchildren and great grandchildren. She cherished her time spent with family and friends. She will be missed immensely as she joins her beloved husband of almost 31 years, Randall Rudd, her son Charles Rudd, and her sister and brother-in-law Pat and Jim Hicks. Sandy leaves behind a legacy of survivors including her daughter Jill Gallops and her husband Michael of Rowlett, TX; Scott Rudd and his wife Leslie of Rowlett, TX; Daughter-In-Law Elizabeth Rudd of Balch Springs, TX. Sandy loved and spoiled her 15 grandchildren, Miranda Evans and her husband Adam of Frisco, TX; Brittany Ross of Rowlett, TX; Taylor Phillips and his fiancé Ali Martinez of Dallas, TX; Keerigan Rudd of Grand Prairie, TX; Keaton Rudd of Garland, TX; Seth Swinford of Dallas, TX; Justin Rudd and his wife Annie of Stewartstown, PA; Tiffany Martinez and her husband Will of Balch Springs, TX; Carlos Gallops of Rowlett, TX; Chyanne Benietz and her husband Ricardo of San Angelo, TX; Sharayah Burnett and her husband Jonathan of N. Logan, UT; Chase Gallops of Dallas, TX; Karilyn Furr of Dallas, TX; Kaci Gallops of Terrell, TX; and Mariany Gallops of Rowlett, TX. Sandy also leaves behind her adored 16 great grandchildren: Jordan Jones, Braylon Jones, Kason Evans, Luka Evans, Jackson Evans, Aubree Martinez, Charlie Rudd, Flora Rudd, Henry Ulrich, Jack Ulrich, Lyric Gallops, Luke Burnett, Gideon Burnett, Mattie Burnett, Logan Furr, and Anthony Benitez. Other survivors include her beloved niece and nephew LeAnne Hicks of Vacaville, CA; Jim Hicks of Shreveport, LA; and beloved cousins Marjorie Nichta (Tallent) and her husband Tom; and John Tallent and his wife Yvonne.

Sandy's family invites you to join the service by clicking this Live Stream link: https://youtu.be/fwaJ8NV4xRw Sandra (Sandy) Clayton Rudd of Mesquite, Texas, passed away on May 6, 2022. She was born on September 28, 1945 in Dallas, Texas... View Obituary & Service Information

The family of Sandra Clayton Rudd created this Life Tributes page to make it easy to share your memories.

Sandy&#39;s family invites you to join the service by clicking this...