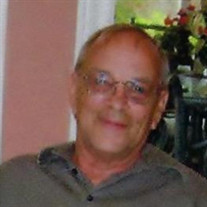 Rodney Wayne Schwarz, age 74, of Rockwall, TX, passed away on May 30, 2021. He was born September 1, 1946, in Taylor, TX, to Norris William Lee Schwarz and Gladys Minnie (Merkord) Schwarz. Rodney graduated from Rusk High School in 1964 and went on to attend Tyler Junior College where he studied electronics and graduated in 1966. He served his country in the United States Army, spending three years total, one and a half years in Vietnam as a communications specialist. After his service, he returned home where he met Janet in 1969, they married in July of 1970 and welcomed four children in the years following. Rodney found his career in 1976 when he started work for TP&L. At his death, he was still working with Luminant Energy as a Sr. Production Tech in Forney, TX. Probably his favorite pass time, he was very dedicated to his work. He attended Our Savior Lutheran Church in Rockwall. His presence will be deeply missed. Rodney is survived by his loving wife: Janet Louise Schwarz of Fate, TX; sons: Rowland W. Schwarz of Grand Prairie, TX, Brian D. Schwarz and wife Jennifer of Knoxville, TN, and Kevin M. Schwarz of Grand Prairie, TX; daughter: Angela R. Schwarz of Fate, TX; grandchildren; Laura, and Autumn; great-grandchildren: Piper, Evy, and a future great-grandchild later this year; brother: Rick Schwarz and wife Jane of Thorndale, TX; uncle: Bill Schwarz of Austin, TX; and numerous nieces, nephews, and relatives. He was preceded in death by his parents: Norris and Gladys Schwarz; and grandparents: William and Hattie Schwarz, and Fritz and Martha Merkord. Funeral services will be held 1:00pm Monday, June 7, 2021, at Our Savior Lutheran Church, 3003 Horizon Rd, Rockwall, TX 75032, officiated by Pastor Paul Ferguson. The service will be followed by a reception in the Fellowship Hall. Flowers and condolences can be sent to the church. A visitation will take place prior to the service beginning at noon.

The family of Rodney Wayne Schwarz created this Life Tributes page to make it easy to share your memories.

Rodney Wayne Schwarz, age 74, of Rockwall, TX, passed away on...