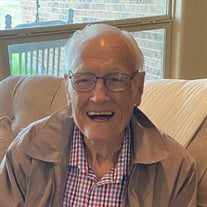 Robert Edgar Colley, age 86, and long-time resident of Garland, TX, went to be with the Lord on August 12, 2021. He was born January 27, 1935, in Paris, TX, to Alvin W. Colley and Ruby (O’dea) Colley. Robert grew up in the Oak Cliff area of Dallas. He was a member of Christian Center of Mesquite. Robert was a man of prayer and loved serving others. He was an ordained pastor who had a gift for teaching. He was a good neighbor to everyone. Robert reached out to those in need in his community. On a blind date arranged by a friend, he met his wife, Fay, and they were married three weeks later at the old Rockwall Methodist Church. Robert enjoyed gardening and spending time outside at their lake house in Mineola. God and family were very important to him. Robert will be deeply missed. One of Robert’s favorite sayings was “You are blessed and highly favored.” Robert is survived by his loving wife of 67 years: Fay Colley of Garland, TX; daughters: Greta Lynn Carpenter and husband Douglas James Carpenter of Royse City, TX, and Rhonda Colley of Tulsa, OK; grandchildren: Audra Fletcher and husband, Captain Evan Fletcher stationed at Fort Hood, TX, and Joshua Colley Carpenter of Sandford, FL; great-grandson: Wyatt James Fletcher; sister: Betty Hansard of Farmers Branch, TX; and host of relatives and friends. A celebration of Robert’s life will be held 4:00pm Saturday, August 21, 2021, at Reflections at Rest Haven Funeral Home-Rockwall Location. Due to Covid-19, the service will be private. Donations can be made in Robert’s honor to the Christian Center of Mesquite. https://www.christiancentermesquite.org/giving/

The family of Robert Edgar Colley created this Life Tributes page to make it easy to share your memories.