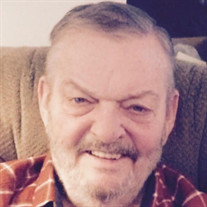 Richard "Rick" Farley Fulford, Jr., 77, a long-time resident of Michigan and California, passed peacefully from this life on April 2, 2021. He was surrounded by family. Rick was born to Janet Grace Smalser and Richard Farley Fulford Sr. on April 29, 1943, in Dearborn, Michigan. He was an only child who was doted on by his mother. His relationship with her was one that he loved and cherished all the days of his life. Rick attended Taylor Center High School and graduated on June 15th, 1961. While there, he played football and basketball. During his senior year, he was a starting Fullback on the football team. He also was voted "most beautiful eyes" in his class and he made sure to brag about that to everyone! After high school, he attended Northern Michigan University in Marquette. He then went on to have a successful career in construction starting out as a laborer and working his way up to Superintendent. Rick was especially proud to have worked on projects at Disney's Epcot Center and Disney's California Adventure. When he retired from construction, he started his own tax preparation service (Cherry Town Taxes). He had a passion for numbers and his long-time clients appreciated his attention to detail. Rick was married to his first wife, Rose, in August 1966. They were married for 33 years and had three children, Michelle, Richard, and Adrienne. He married his second wife, Denise, on July 5, 2003. They were married for 18 years. He cared for her children, Paul, Daniel, Matthew and Michael, as if they were his own. He considered himself blessed to have had two families who loved him so much. In life, Rick loved to cook for his family and he was particularly good at creating new recipes of his own. He enjoyed watching sports, especially the Detroit Lions. He loved spending time with his little dog, Daisy. She was his best friend and gave him much joy. Rick was a caring man who always wanted to help others. All who knew him appreciated his quick wit and a good sense of humor. He will be remembered as a loving and devoted husband, father, and grandfather. He will be missed. Rick is survived by his loving wife: Denise Pauline (Capps) Fulford; former spouse: Rose (Mazzola) Fulford; children: Michelle Molitor (Matthew), Richard Fulford (Amy), Adrienne Martin, Paul Tellechea (Maxine), Daniel Tellechea (Heather), Michael Tellechea and Matthew Tellechea; grandchildren: Matthew, Michael, Madeleine, Esme, Lucy, Tristan, Isobel, Ezekiel, Weston, Rosie, Brittany, Aurora, Davina, Samuel, Saige and Ella; and great-grandchildren: Jace and Bralin. He was preceded in death by his parents: Janet and Donald Crosier and Richard Fulford Sr. A memorial service will be announced at a future date. In lieu of flowers, please donate to Faith Presbyterian Hospice, 12477 Merit Drive, Dallas, TX 75251, or at www.faithpreshospice.org.

Richard "Rick" Farley Fulford, Jr., 77, a long-time resident of Michigan and California, passed peacefully from this life on April 2, 2021. He was surrounded by family. Rick was born to Janet Grace Smalser and Richard Farley Fulford Sr. on... View Obituary & Service Information

The family of Richard "Rick" Farley Fulford Jr. created this Life Tributes page to make it easy to share your memories.