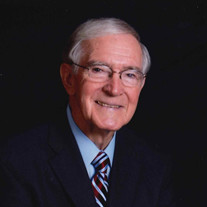 Rev. Billy Martin Adams was born February 1, 1934, to Joe Fairchild and Ivy (Kufus) Adams near South Haven, Kansas, and peacefully entered his Eternal Home on April 28, 2022. He attended school in South Haven, KS and Arkansas City, KS. Fast-pitch softball was his favorite sport, and he was well-known for his pitching skills. Billy came from a very musical family and loved to sing. As a young man, he played the clarinet and was active in the marching band. His love for music was second only to his love for Christ, his family, and his concern for others. Billy married Beverly Lorraine Stewart at the First Baptist Church, in Arkansas City, KS, on February 27, 1955, and they were married for 65 years. From this union were four children: Cyd, Lori, Gary, and Julie. Prior to attending college, he was a cabinetmaker, as well as Superintendent of Construction for the Kansas State School for the Deaf in Olathe. In 1964, he graduated from Baptist Bible College with a degree in Theology. He pastored and served in churches in Kansas, Oklahoma, and California, and was most recently a faithful member of Victory Baptist Church, of Rowlett, TX. Billy is preceded in death by his wife, parents, sister, and two brothers. He is survived by children: Cyd Allen and husband, David, of Ardmore, OK; Lori Adams, of Plano, TX; Gary Adams and wife, Holly, of Billings, MT; Julie Watson and husband, Jeffrey, of Huntersville, NC; grandchildren: Courtney Allen Cowan and husband, Jereme, and Jeremiah Allen and wife, Christie, all of Oklahoma City, OK; Michaela Watson Hindes and husband, Caleb, of Huntersville, NC; Mariah Cleveland, Hannah Adams and Haylee Adams, of Billings, MT; great grandchildren: Arthur and Winston Allen, of Oklahoma City, OK; Declan and Ivy Hindes, of Huntersville, NC; and brother-in-law, Phillip Stewart, of Las Vegas, NV. May his legacy of faith live on. Rest Haven Funeral Home of Rowlett will conduct a service to celebrate the life of this dedicated man who ministered to so many, on Friday, May 6, 2022, at 11:00 AM, at Victory Baptist Church, 6821 Lakeview Parkway, Rowlett, TX. The family will gather with friends prior to the service beginning at 10:00 AM. Interment will be on Saturday, May 7, 2022, at Rose Hill Cemetery, South Haven, KS at 1:00 PM. In lieu of flowers, those planning an expression of sympathy are asked to consider the following: The Billy and Beverly Adams Keep Smiling Fund, c/o The Grace Center Texas, P. O. Box 853010, Richardson, TX 75085-3010, www.gracecentertexas.org; or the Victory Baptist Church, 6821 Lakeview Parkway, Rowlett, TX 75089, www.vbcrowlett.com. The family would like to thank the staff of Baylor Scott & White Medical Center of Plano and Faith Presbyterian Hospice of Dallas for their loving and compassionate care. Thanks be to God for His abundant grace.

The family of Rev. Billy Adams created this Life Tributes page to make it easy to share your memories.