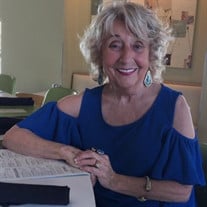 Priscilla May Siegel (nee’ McVey) gained her angel wings on March 6, 2022 at home in Dallas, TX. Priscilla was 79 years old. Priscilla was born October 22, 1942, in Mt. Auburn, Il to Cecil and Helen McVey (nee’ Fickes). She was the youngest of nine children, having five brothers and three sisters. Priscilla moved with her parents to Tucson, Arizona her senior year of High School. Upon graduation, she moved back to Illinois where she spent much of her time with her oldest sister Mary and her children. Through Mary, she met the love of her life – Charles (Chuck) Siegel with whom she married, had two children, and lived with until his death in 2006. Priscilla was a great friend to all who knew her. Always helping anyone who was in need, putting other people’s needs in front of her own. Priscilla loved a good party. Known for throwing amazing company dinners in her home as well as her annual Christmas party, she always enjoyed a gathering of family and friends. In addition to her parties, Priscilla loved to travel. She was able to travel to exotic places like Costa Rica, Hawaii, and Puerto Rico on many occasions. Her greatest joy was being a wife, mother and grandmother. Known to her grandchildren as MiMi, she loved spending time with them. Countless hours were spent babysitting, taking them on trips, staying with them when they were sick, watching them participate in their many passions (sports, theater and, dance) throughout their childhoods. She was proud of each one of them and never failed to sing their praises to anyone who would listen. She kept a box of keepsakes that centered around the time that she spent with the loves of her life. Priscilla is survived by her children – Mark Siegel (Paula), Stacie Wells (Richard), grandchildren, Austin Aulds, Cameron Siegel, Hunter Siegel, Nina Siegel, AJ Wells, Ava Wells, Richard Wells Jr (Katie), Alexa Coldewey (Kevin), Ashleigh Rury (William), Aly Wells; her sisters Mary Edwards and Patty Turner (David) and many, many nieces and nephews. We know that she is now dancing in heaven with those that preceded her in death – her parents, her husband Chuck, her brothers -Bill, Dean, Leroy, Joe, Buck (Cecil) and Jimmy; her beloved niece and best friend Susie Creighton, and so many more nieces and nephews. A celebration of life is planned for Saturday, March 26, 2022 from 2:00pm to 5:00pm at the Shelton Condominium to remember and toast a well lived life.

The family of Priscilla May Siegel created this Life Tributes page to make it easy to share your memories.