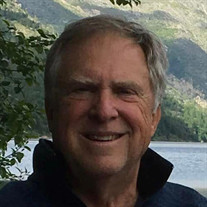 Paul John Bowler, age 75, and a resident of Rockwall, TX, passed away March 24, 2022. He was born January 24, 1947, in Los Angeles, CA, to Charles Norman Bowler, Jr. and Clara Margaretha (Mayer) Bowler. Paul served his country in the U.S. Navy as a Hurricane Hunter, collecting weather data. He was a very patriotic man who loved his country. Paul was a dedicated and loving husband, father and “Papa.” He was also a faithful man of Christ. Paul loved people and he enjoyed being a jokester. He had a very recognizable laugh. His presence will be deeply missed. Paul is survived by his loving wife of 52 years: Shirley Bowler; daughters: Traci Schmidt and husband Hal, and Teri Bumpers and husband James; grandchildren: Crosby Schmidt, Calvin Schmidt, Christopher Bowler, Caitlyn Bowler, and Courtney Bowler; brothers: Ralph Bowler, and Mark Bowler; and a host of nieces and nephews. Paul was preceded in death by his parents: Charles and Clara Bowler. A celebration of Paul’s life will be held at 2:00pm, Friday, April 1, 2022, at First Baptist Church, 610 S. Goliad Street, Rockwall. A gathering of family friends will be held prior to the service, beginning at 1:00pm. In lieu of flowers, donations in memory of Paul may be made to The Wounded Warriors Project at https://support.woundedwarriorproject.org.

The family of Paul John Bowler created this Life Tributes page to make it easy to share your memories.