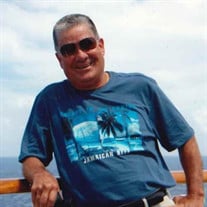 The Cordoba family invite you to join the Celebration of Life via livestream by logging on to the link below at 1:55pm: https://view.oneroomstreaming.com/authorise.php?k=1637720043150053 Event ID: ResthavenRow Password: Q6UVKB We will start Orlando’s story as he told it to us. At a very young age, he worked alongside family learning their craft: netting the Costa Rican coastline and diving without the aid of any gear, to the bottom of the inlet. Then searching for lobster, catching it by hand, and pushing up to rip through the froth of the sea with a gasp for air. It’s easy to imagine how such could ignite a sense of adventure, but also how a boy predisposed to competitive nature, chooses also to apply the art of controlled breathing and full body dexterity to dribbling a football in a country where World Cup aspirations are cultural. Though soccer was a passion, his love for the ocean, and the creatures therein, would win out as he took to the seas, and worked his way though careers offered in the cruise line industry. Orlando had a natural gift for hospitality and this friendly nature would serve him well throughout his life, but more so, for those he loved, especially as he matured. Orlando was inclined to crowd much into his life, pushing mid-life changes into his late 40s. The ships he worked often docked in America, and he found himself drifting through Texas. It happened one night that his eyes fixed on Donna and one dance led to another, and he would dance with no other, followed by date after date, until family introductions were in order. And so it happened that Donna and Orlando were married April 4, 1998. Usually this is known as settling down. Buckle-up; these two had been living lives on hold, waiting for each other, and their new adventure would be less a plan, and more like a destiny. Travel would take them coast to coast, to Caribbean islands, and other tropical paradises, but also Alaska, where Orlando’s enjoyment of trains hit an apex. Orlando’s inclination toward hospitality turned to family and friends-- and became an aspect of business. When one thinks of improv, comedians come to mind-- but Orlando embodied improv, and comedic clowning around was second to backyard engineering, where usual applications were stretched toward Orlandian versatility. Professionally, Orlando secured welding certification, but settled into fencing, and most frequently landscaping. In the year 2000, Orlando took his oath as a naturalized citizen of these United States. Orlando could never interest Donna in his love for a good boxing match, but he did embrace Donna’s interest in the Cowboys, and then he discovered a new water sport. Oddly frozen, but the perfect hybrid for all his passions, a game of soccer-like passing, some NFL physicality, and full body dexterity, with the addition of lightning speed. Yes, hockey, where the puck could drop, but also the gloves, such that boxing was the interlude and the rounds were passing the puck,and burying it top-shelf or five-hole. The cherry on top was that Donna loved and watched the Dallas Stars too, (even the fights were enjoyable, being mostly entertained by Orlando’s reaction). Orlando was familiar with life as a test. So, when the final test of his life fell on him, he was prepared (as good as one can be). He vowed to beat it, mostly because his “Angel,” Donna needed him. He continued his work as long as he could and continued to provide for Donna’s physical needs much longer, even as he endured his own grievous pain. These are the times when normal men, not given to religious things, turn hellish bitterness against God. Orlando, however, turned fervently to things of God; thanked God; praised God, and trusted Him for his redemption. To talk to Orlando was to think he had spent a lifetime in Church, which reveals that he always understood God was present and watching. So these are the life and times of Orlando Urena Cordobo, who has passed into the light of the eternal I AM; Our Father, Son and Holy Spirit, having raced to the goal, and finishing, top-shelf. Orlando’s celebration, dance, smile, and joy is in the embrace of Yahweh, his God. Orlando Urena Cordoba passed away peacefully on November 21, 2021, at his home in Garland, TX, at the age of 71. He was born March 19, 1950, in San Jose, Costa Rica, to Carlos Cordoba and Christina (Salazar) Granados. Orlando was a member of the Church of the Nazarene. He was a loving and devoted family man. On April 4, 1998, in Mesquite, TX, he married Donna Baldwin and they shared 23 wonderful years. Orlando was an entrepreneur specializing in landscaping and previously worked as a cruise bartender and limo driver. His hobbies and interests included soccer, traveling, trains and the ocean. He was a boxing enthusiast and avid fan of the Dallas Stars. Orlando is survived by his loving wife: Donna Cordoba; children: Jacqueline Cordoba Vega, Ronald Cordoba Vega, and Gabriel Fuentes; 12 grandchildren; and a large extended family in Costa Rica. He is also survived by in-laws: Ruby Baldwin, Calvin and Teresa Jones, Tim and Sharon Groves, Billy and Debbie Baldwin, and numerous nieces and nephews. He was preceded in death by his parents, father-in-law Roy Gene Baldwin, and nephew Calvin Paul Jones.

The Cordoba family invite you to join the Celebration of Life via livestream by logging on to the link below at 1:55pm: https://view.oneroomstreaming.com/authorise.php?k=1637720043150053 Event ID: ResthavenRow Password: Q6UVKB We will start... View Obituary & Service Information

The Cordoba family invite you to join the Celebration of Life via livestream by logging on to:

The Cordoba family invite you to join the Celebration of Life...