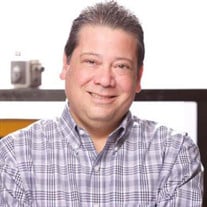 Michael Rene Muñoz, a 20-year resident of Heath, TX, passed away August 26, 2021. He was born March 2, 1968, in Dallas, TX to Henry and Gloria (Montoya) Muñoz and attended Richardson schools, graduating from RHS in 1986. Following his college years at Texas State University, he began a successful career in Spanish Language media rising from an Account Executive at KESS/KICK-FM radio to a 17-year career at Univision Communications where he started as Sales Executive, Local and National Sales Manager, and rose to General Sales Manager. He had a charismatic personality, had outstanding communication skills, and an impeccable work ethic. He considered it a privilege to be able to share his skills in mentoring his associates. He spent his last five corporate years as a Client Partner at Facebook. He started playing soccer when he was four years old, was a gifted player, and continued his participation in that sport throughout college. He excelled at the highest level in everything he participated in, whether it was soccer, basketball, or music. He was able to use his soccer skills, knowledge of the game, and passion for the sport when he coached for Lake Pointe Church in Rockwall, where he was a member, for ten years. We can't leave out his love for the Dallas Cowboys and he bled blue for Chelsea. He genuinely loved people and everyone loved him. He learned to cook at an early age and loved cooking for his family and friends. His sons and family were his life. Michael is survived by his wife of 24 years, Heidi Muñoz, sons Matthew and Anthony Muñoz; his parents Henry and Gloria Muñoz, brother Mark Henry Muñoz; nieces, Melody, Lexi and Gabi Muñoz; sister-in-law Karen Muñoz, and a host of extended family and friends. Memorial services will be held at 10:00 a.m. Friday, September 3, 2021, at Lake Pointe Church-The Bridge, 701 E. I-30, Rockwall, TX 75087. Pastor Matt Humber will preside at the memorial and inurnment. Inurnment at Rest Haven Memorial Park will be private. Donations may be made in honor of Michael Muñoz at the following: https://dallasfoundation.bswhealth.com/ways-to-give/donate Select Transplant from the drop-down menu under designation or www.diabetes.org.

Michael Rene Muñoz, a 20-year resident of Heath, TX, passed away August 26, 2021. He was born March 2, 1968, in Dallas, TX to Henry and Gloria (Montoya) Muñoz and attended Richardson schools, graduating from RHS in 1986. Following his college... View Obituary & Service Information

The family of Michael Rene Muñoz created this Life Tributes page to make it easy to share your memories.