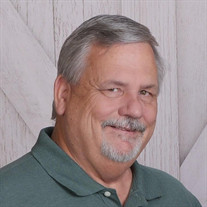 Michael “Mike” Dewitt Simmons, 64, of Royse City passed away on Friday, May 13, 2022. Mike was born September 15, 1957, in Dallas, TX to Dewitt William Simmons and Loyce Evelyn Chappell, who preceded him in death. Mike was a 1976 graduate of Bryan Adams High School in Dallas, TX, and went on to receive a Bachelor of Business Administration from North Texas State University in 1980. Mike worked in real estate and insurance until 1992 when he returned to school to pursue a Bachelor of Science in Nursing from Texas Woman’s University. Mike was a nurse for more than 20 years and had a heart for working with elderly patients. Mike owned and managed several residential care homes in the Dallas area, and later worked as a home healthcare nurse until his retirement in 2017. After an eight-year-long courtship, Mike married his college sweetheart, Vickie Carol Harris in June 1985 in a ceremony at the home of Vickie’s parents, Charles and Selma Harris in Royse City. Mike would say that his greatest joy and legacy were his three beautiful, intelligent children, Katie, James, and Joseph - who all went on to marry extremely well; and his grandchildren, Caroline and Luke—whom he adored. Mike was a lifelong animal lover and frequently provided a loving home to stray dogs and cats, who repaid his kindness with love and affection. Mike is survived by his wife, Vickie Simmons; daughter Katie Laney and her husband, Daniel; son James Simmons and his wife, Amanda; son Joseph Simmons and his wife, Morgan; grandchildren Caroline Laney and Luke Simmons; sister Patricia Foley; father-in-law Charles Harris; dogs Chance, Sadie, and Nicky; and numerous family members and friends. In lieu of flowers, please consider making a donation in memory of Michael Simmons to the children’s ministry of Murphy Road Baptist Church, 411 S. Murphy Road, Murphy, TX 75094, or at www.murphychurch.com/give. The service will also be live-streamed; please go to www.oneroomstreaming.com and click on the "watch your service" icon and use Event ID: resthavenrockwall and password: 683K8E “For it is by grace you have been saved, through faith—and this is not from yourselves, it is the gift of God.” Ephesians 2:8

The family of Michael "Mike" Dewitt Simmons created this Life Tributes page to make it easy to share your memories.