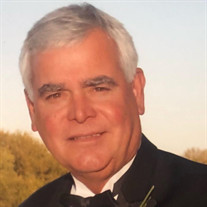 Michael B. McClendon left this world and entered eternal life on June 18, 2021. Mike was born to Robert and Patricia McClendon and was the “New Year’s Baby” of Dallas, TX, in 1952. In 1969, the family moved to Oklahoma City where Mike attended Central State University. Upon graduation, he enlisted in the United States Army as a 1st Lieutenant, earning the honor of Air Borne Ranger. He married his best friend and wife of 42 years, Paula S. Furgerson McClendon, in 1976. After five years in Ft. Hood, TX, the couple moved to Houston where they welcomed their first-born daughter, Kelly, into the world and less than two years later another beautiful daughter, Kari. In 1980, the family moved to Oklahoma City where Mike worked as the Personnel Manager of an oil and gas company. He earned his MBA while serving in the United States Reserves and retired with the rank of Lt. Colonel. In 1985, he entered the trucking industry in and around Rockwall, TX, for the next 36 years. He worked his way up to “the corner office,” where he served as President of Texas Star Express. Mike had a fervent and enduring love for his family. Rarely a day passed by that he didn’t speak an ear-full about one of his six grandchildren. He had an exponential love for God’s creation and loved everything outdoors from baseball, basketball, OU football, fishing and hunting. He loved to travel and see the world and explore any new adventures, from cruising the Danube, the Rhine, exploring Paris and trekking across Switzerland, France, Austria, Italy and Germany with his wife and daughters. He is survived by his daughter and son-in-law, Kelly and Jack Wright of Round Rock, TX, and his daughter and son-in-law, Kari and Brian Jones of McKinney, TX, his six grandchildren: Zane, Taylor, Brooklyn, Ella, Madison and Hadley; and two brothers: Randy and David. He was preceded in death by his father: Robert Bryan McClendon; and his mother: Patricia N. McClendon Roe. Graveside services will be held at 10:00am, Wednesday, June 23, 2021, in Rest Haven Memorial Park.

The family of Michael Bryan McClendon created this Life Tributes page to make it easy to share your memories.

Michael B. McClendon left this world and entered eternal life...