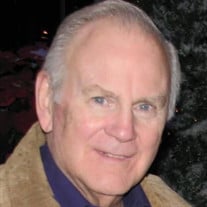 Michael Francis Keegan, 86, of Rockwall, Texas, passed from this life on January 24, 2022. Michael was born to John Joseph Keegan and Lillian Marie (Hartnett) Keegan, on February 23, 1935, in Scranton, Pennsylvania. Michael and Patricia were united in marriage January 31, 1959, in Akron, Ohio celebrating 63 years together. Born in Scranton, PA he along with his parents and sister moved to Akron, OH at a young age. Michael “Mike” attended school at St. Vincent de Paul in Akron and then attended high school at Cuyahoga Falls HS where he was a recognized football player on the Black Tigers football team. His senior year they placed second in division. He attended Akron University studying Industrial Management. Mike joined the US Army in June of 1955 where he also played football for the Army. He served two years active duty and six years reserve honorably discharged. Mike served two tours overseas, one in Europe and the other in the Middle East and North Africa. He was a member of the 11th Airborne Division ("Angels") the division underwent rigorous training. This Division was a highly trained attack force. Mike was a paratrooper, medic, and a marksman elevated to the level of Sniper, the highest in proficiency. The Angels were known as a “specialized force” for special duties during both active war and occupying times. Mike could probably count on his hands the number of times he ever landed in an airplane, he always jumped to his destination which many times he would be alone for up to 30 days performing his duties. After serving in the military, he played professional football in the Canadian Football league. During his school years, Mike was an accomplished dancer both in tap and Adagio dancing. Adagio is acrobatic balance with counterbalance where one partner is hoisted up in the air and the other partner acts as the base. He was recognized for his strength being able to lift his partner effortlessly. Mike returned to college at Kent state after marrying Patricia and having a family to complete his education. Deciding to leave football returning to Akron, in 1957 Mike began a career with the Firestone Tire and Rubber Co. He worked in the Research lab developing a process to manufacture tires with synthetic materials versus harvested rubber. In 1962 he survived the worst explosion in Akron’s, (at the lab) history up to that point--killing one and injuring 18. Mike’s quick actions, military training and being fearless in conflict saved the life of his co-worker. With expertise in the newfound method of tire manufacturing, Mike nicknamed “The Mixmaster” took his career to new heights. He traveled to Europe, The Middle East, throughout N. America and S. America converting plants to this newfound production teaching the way to compound and mix radial tire construction and curing. In 1973 he was recruited by Uniroyal and employed with them in the overseas operations based out of their Connecticut headquarters serving as VP of the South American Division until 1977. In 1977 he and Patricia returned to the states from Venezuela settling in Waco, TX where he became Manager of General Tire. In 1984 he was recruited by Uniroyal Tire again moving to South Bend, IN. as the manager of engineering systems developing new fuel cell systems for F-fighter aircraft for the military saving countless pilot’s lives. In 1987 Mike and Patricia moved to Dallas, TX recruited by Dresser Industries and an opportunity to be close to their daughter in Oklahoma City and son who resided in Dallas. In 1989 Mike left the corporate world to settle in Rockwall, TX. He returned to college obtaining a degree in environmental and commercial refrigeration with AACA & ARI/GAMA. In 1991 he and Patricia opened Eagle Air Conditioning & Heating in Rockwall and sold the company retiring in 1999. As was with Mike, he couldn’t sit around as a retiree! He went to work for the Rockwall ISD as a bus driver and rewardingly a special needs driver until retiring again in 2005 at the age of 70. Mike and Patricia individually and jointly have been active members of the community and home they have loved for 33 years together, Rockwall. Mike has served on or volunteered as: Eastfield College Advisory Board, City of Rockwall Construction Advisory and Appeals Board, City of Rockwall Charter Review Committee, Rockwall Chamber of Commerce Official Santa Claus Christmas parade 1991-1995, Rockwall Chamber of Commerce Ambassador, Rockwall Nursing Care Santa 1991-1995, Admitted to the National Registry of Who’s Who 2001, Member of the Men’s Republican Club, Meals on Wheels official photographer Volunteer, Rockwall Committee of the Aged, Helping Hands Volunteer, Member of the Rockwall Chamber of Commerce as an Ambassador, The city of Rockwall Historical Preservation Advisory Board Member, Rockwall ISD volunteer as a tutor in the ESL program for adults and children Rockwall Republican Men’s club. Mike and Patricia were instrumental in bringing and founding D.A.R.E in the Rockwall ISD. He has been a member of Lakepointe church, and his life group led by Pastor Jerry Minx for many years. Michael is survived by his loving wife of 63 years, The Honorable Patricia Gail (Morris) Keegan; children: Michael J. Keegan, Abigail F. Keegan and spouse Barbara Hillyer; grandchildren: Brittany Coltharp, Chase Aaron Keegan, Aryan Jafarzadeh and wife Christina Massad Jafarzadeh, Haile Margaret Elizabeth Keegan, Matthew Whitwer; great-grandchildren: Lilith-Mae “Lily” Keegan, Jaxon DeFord, Wyatt Dubiel, Bella Dubiel; nieces: Kelly Flynn, Erin Flynn, Colleen Flynn-Sullivan and husband Jimmy; along with a host of great-nieces and great-nephews and great great-nieces and nephews who will all miss him dearly. Mike is preceded in death by his parents; John Joseph Keegan and Lillian Keegan; daughter; Carol Patricia Keegan; sister; Joyce Keegan Flynn and husband Fred Flynn; nephew Frederick J. Flynn Jr. A celebration of Michael’s life will be held at 2:00pm, Saturday, February 5, 2022, at Rest Haven Funeral Home - Rockwall Location with Pastor Jerry Minx, of Lakepointe Church, officiating. A gathering of family and friends will be held Saturday afternoon, prior to the service, beginning at 1:00pm. For those not able to be in attendance, the service will also be livestreamed at the following link: https://view.oneroomstreaming.com/authorise.php?k=1643153072162275

The family of Michael Francis Keegan created this Life Tributes page to make it easy to share your memories.

Michael Francis Keegan, 86, of Rockwall, Texas, passed from this...