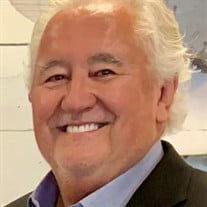 Pastor Michael Lee Hankins, of Rockwall, TX, passed away December 15, 2021, after a brief battle with cancer. He was 71 years old. Michael was born December 16, 1949, in Crockett, TX, to B.B. and Velma Hankins. He was their first-born son and an answer to their prayers. As ministers of the Gospel, his parents established The Christian Center in West Columbia, TX, where he grew up. He graduated from Columbia High School in 1968. After graduation, he studied theology at Oral Roberts University in Tulsa, OK, and earned a theology degree. He met the love of his life, Vicki Suzanne Jones of Wharton, TX, in the summer of 1969, and they went on their first date the night the men walked on the moon. The two were married May 30, 1970, in Wharton, TX. They had four children - Julie, Lyndi, Ryan and Kynsie. Mike and Vicki were associate pastors alongside his parents in West Columbia, where they raised their children until 1988. At that time, the family moved to Rockwall to join the pastoral staff at Church on the Rock. In 1990, Mike and Vicki became the senior pastors of that church. The church is now called Church in the City, where they have been the lead pastors for over 31 years. Pastor Mike was preceded in death by his parents: B.B. and Velma Hankins; paternal grandparents: Robert and Rachel Hankins; and maternal grandparents: Jasper and Lily Mae Dawes. He is survived by his wife of 51 years: Vicki; three daughters: Julie Woods and husband Eddie, Lyndi Rohde and husband Mark, and Kynsie Zakem; son: Ryan Hankins and wife Andrea; eight grandchildren: Madison, Allyson, Olivia, Luke, Hudson, Quintin, Paxton and Lilly; three siblings: Mark Hankins, Faith Hankins and Bob Hankins; and numerous nieces and nephews. Pastor Mike was a true shepherd, a man who was the definition of a pastor. He cared for the sheep in ways that made each person feel special. He loved to travel and especially enjoyed ministry trips to France, Italy, Australia and most recently, Honduras. His favorite sport was basketball as a player, coach and fan. He was a great baker and perfected his famous chocolate chip cookie recipe throughout the years. He was known for his strength of character, his great sense of humor, his big heart, his papa bear hugs, the sound of his voice and his incredible smile. Funeral services will be held at 1:00pm, Tuesday, December 21, 2021, at Church in the City, 6005 Dalrock Road, Rowlett. Interment will be in Rest Haven Memorial Park, Rockwall, TX.

Pastor Michael Lee Hankins, of Rockwall, TX, passed away December 15, 2021, after a brief battle with cancer. He was 71 years old. Michael was born December 16, 1949, in Crockett, TX, to B.B. and Velma Hankins. He was their first-born son... View Obituary & Service Information

The family of Pastor Michael Hankins created this Life Tributes page to make it easy to share your memories.