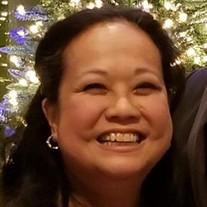 Martha Theresa Granado Ruston of Rowlett, TX was born in Quezon City, Philippines on January 21, 1969 to Regalado Villamor Granado and Elsie Nuevo Granado and passed away on March 30, 2022 after a short but furious battle with endometrial cancer. The Granado family moved to Dallas, TX in 1973 and then settled in Irving, TX in 1978. Martha attended Our Lady of Perpetual Help in Dallas, St Luke and Nimitz High School in Irving and then received a Bachelor of Science in Information Systems from the University of Texas at Arlington. During college she worked for an airline and travelled the world and after college she went to work at Motorola in Austin, TX. At Motorola, Martha met Matt, the love of her life, and they were married in Dallas on January 26, 2003. They have two sons, Nathaniel and Samuel, who were the light and focus of Martha’s life for 18 years as she stayed home with the boys, volunteered at school, served on PTA boards, and homeschooled for several years. At Sacred Heart Catholic Church in Rowlett, Martha and Matt taught Confirmation classes, she helped at Vacation Bible School, and they faithfully attended Mass and parish events. Martha loved laughing and visiting with friends and family and had many hobbies, including sewing, reading, video games, camping, singing with her incredibly beautiful voice, and cooking. Martha’s joyful presence and cheerful spirit will be missed by the many who loved her. Martha is preceded in death by her father, Regalado Granado and mother-in-law, Juliene Ruston. Martha is survived by her husband, Matthew Allen Ruston; sons, Nathaniel Rink Ruston (18) and Samuel Regalado Ruston (14); her mother, Elsie Nuevo Granado; her brothers, George Granado (Chona) of Spring, TX, Gilbert Granado of Austin, TX, and Glenn Granado (Michelle) of Irving, TX; nephews, Matthew Granado, Zachary Granado, Kevin Ruston, and Brian Ruston; nieces, Kailtyn Hickey (Cole) and Alexandra Granado Sanchez (Kevin); father-in-law, Dwight Ruston; brothers-in-law Paul Ruston (Iga), and David Ruston (Sherri), and many uncles, aunts, cousins and extended family who were so special to Martha.

Martha Theresa Granado Ruston of Rowlett, TX was born in Quezon City, Philippines on January 21, 1969 to Regalado Villamor Granado and Elsie Nuevo Granado and passed away on March 30, 2022 after a short but furious battle with endometrial cancer.... View Obituary & Service Information

The family of Martha Granado Ruston created this Life Tributes page to make it easy to share your memories.