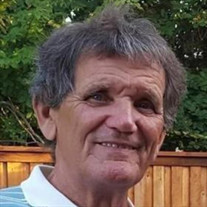 Leslie Clifford Parker, age 74, passed away on September 30, 2021, in Rockwall Texas. Les was born March 15, 1947, in Aylesbury, England to Leslie and Lorna parker. Les and his family moved from England to Rockwall in November 1982. From the age of 18, Les followed in his father's footsteps working in construction as a tile setter. He loved the work he did and continued it for 52 years until age 70 when he was forced to retire due to ill health. He was a well-respected member of the community and his work ethic was second to none. Some of his work legacies include the marble floor in the Towneast Ford showroom, Rest Haven Rockwall, IKEA Frisco showroom, Goodeats restaurants, plus many residential homes in Rockwall and surrounding areas. Les is survived by his wife of 55 years Lynn parker, daughters Melanie Pyland and husband Kenneth and Bridgett Parker and partner Steve. Grandchildren Amanda Pyland Tesar (who preceded him in death) and husband Joseph, Sarah Pyland, Matthew Pyland, Jack Hoofnagle, Andrew Hoofnagle, Lucas Hoofnagle, and great-granddaughter Kenzie Tesar, and a host of family and friends that will miss him terribly. Les's hobbies included woodworking, flying drones, and a keen interest in keeping up with technology. His passion was cruising and he also enjoyed going out in his RV. In earlier years he enjoyed photography, he was a member of a boxing club in England. He played in dart teams in England and Dallas for many years. He was preceded in death by his parents, sisters, Wendy Marsh, Shirley Gould, and brother Laurie Parker. Services for Les will be at Rest Haven Funeral Home-Rockwall Location, Saturday, October 9 at 4:00 pm. Those who knew him are welcome to come and celebrate his life. The service will also be live-streamed; please go to www.oneroomstreaming.com and click on the "watch your service" icon and use Event ID: resthavenrockwall and password: JYAKCY

Leslie Clifford Parker, age 74, passed away on September 30, 2021, in Rockwall Texas. Les was born March 15, 1947, in Aylesbury, England to Leslie and Lorna parker. Les and his family moved from England to Rockwall in November 1982. From the... View Obituary & Service Information

The family of Leslie Clifford Parker created this Life Tributes page to make it easy to share your memories.