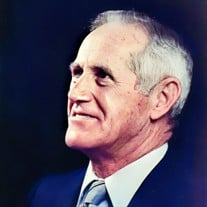 Please click the link below to view the livestream beginning at 1:55pm https://view.oneroomstreaming.com/authorise.php?k=1639007638152760 Lawrence Chambers of Royce City, Texas passed away on Monday, December 6, 2021 in Dallas, Texas, at the age of 95. After several months of declining health, Lawrence passed peacefully to join his beloved wife, and Savior forever. He was born in Monticello, Arkansas on February 10, 1926, to parents Camp and Patsy Chambers, the 9th of 12 children. He worked on his family’s farm where he mastered the lifelong art of farming and carpentry, becoming a skilled craftsman at an early age. In Monticello, he met and fell in love with his beloved wife of 73 years, Olive Marie Graves, where they wed on January 3, 1947. His strong work ethic and desire to take care of his family led to him enlisting in the Army, serving as a World War II Veteran. He worked at the local Arsenal in Pine Bluff, Arkansas during his service. After his service, they spent a brief stint in New Jersey where they had the first of their three children, Cathleen. They soon returned to Arkansas where they had two more sons, David and Mark. In the late 1950’s, Lawrence moved his young family from Arkansas to Richardson, Texas until the early ‘70s when they moved to Royce City, Texas building their dream home together as a family, which was to be their permanent residence until 2018. Lawrence worked in the local Dallas area as a general contractor and skilled craftsman. He was a deeply religious man serving as a deacon and leader in his church. The only thing in life more important than his Christian Faith, was Lawrence’s family. He had a deep love of family and cherished his parents, children, and grandchildren. He was an ardent fan who loved all competitive sports, particularly football, baseball, and basketball. His love of competing shown through in his bowling and domino playing. He was an avid outdoorsman as well, whose love of camping, fishing, and gardening was unmatched. He and Olive loved to share the fruits of their labors with family, friends, and neighbors. Lawrence is preceded in death by his beloved wife, Olive Marie Graves Chambers of 73 years, his mother and father, ten brothers and sisters, and extensive family. He is survived in death by his children, Cathleen O’Hearn and husband Tim of Bells, Texas and their children Dana Marlar and life partner Cliff Maisberger of Garland, Texas, and Randy O’Hearn; son David and wife Cindy Chambers and their children Abi Chambers and partner Lance Leonard, and Nicholas Chambers; and son Mark Chambers and his life partner David Roy of New York City, New York; his five great-grandchildren Jordan and husband Thomas Shakelford, Aeron Marlar, Sidney Marlar, Trinity O’Hearn, and Felix Chambers; and four great-great grandchildren Allison, Lula Bell, Kristan, and Kynlee. He is also survived by his brother W.C. “Red” Chambers of Kirbyville, Texas. Visitation for Lawrence is scheduled for Saturday, December 11, 2021, from 1:00 to 2:00 pm. The visitation will be held at Rest Haven Funeral Home, 3701 Rowlett Road, Rowlett, TX 75088 (972) 412-5195. All are invited to attend. The funeral will follow immediately at 2:00 pm. Family has requested that all attendees wear mask. For those unable to attend in person, services can be viewed via Live-Stream. Log-in information available ten minutes before the service at https://view.oneroomstreaming.com/authorise.php?k=1639007638152760. In lieu of flowers, those wishing to honor Lawrence’s lifelong commitment to his Christian Faith and family can make donations to the Community Baptist Church, 6012 TX-276, Royse City, Texas 75189.

Please click the link below to view the livestream beginning at 1:55pm https://view.oneroomstreaming.com/authorise.php?k=1639007638152760 Lawrence Chambers of Royce City, Texas passed away on Monday, December 6, 2021 in Dallas, Texas, at the... View Obituary & Service Information

The family of Lawrence Chambers created this Life Tributes page to make it easy to share your memories.

Please click the link below to view the livestream beginning...