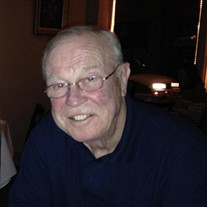 Larry Donaghe joined his Lord and Savior April 30, 2021. He was born to Oca and Muriel (Parks) Donaghe November 20, 1943, in Olustee, OK. A gathering will be held Tuesday, May 4, 2021, from 5:00 to 7:00pm at The Gathering at Rest Haven Funeral Home-Rockwall Location. Larry attended Altus schools and graduated in 1963. After graduation, he attended Southwestern State College and met his wife of 53 years Priscilla (Prissy) Hector. Larry graduated with Business and Education majors. While working on his Business degree, Larry and Priscilla were Dorm Parents to the boys in Neff Hall. Larry was in the Army National Guard, and after graduation from college, he entered into manufacturing and worked many years for Fieldcrest Mills before returning to Oklahoma. He served as Human Resource Manager for Western Farmers Electric in Anadarko, OK. While in Anadarko, he was elected to the City Council. In 1985, Larry returned to his beloved Altus, OK, as a State Farm Agent until his retirement in 2007. Larry was a major sports fan, loved playing golf, and especially enjoyed spending time at his lake house on Hicks Mountain! He loved to brag on his son and grandchildren. In August of 2010, Larry and Priscilla moved to Heath, TX, to be close to their son Chance’s family. Larry was preceded in death by his parents and his sister Kay Pollard. He is survived by his loving wife: Priscilla; son: Chance and wife Suzi; and beloved grandchildren: Grace and Charlie Donaghe. He is also survived by a special nephew: Rocky Combs; and many other nieces, nephews, cousins, and a sister Patsy Combs. Memorials may be made to Hospice.

The family of Larry Donaghe created this Life Tributes page to make it easy to share your memories.