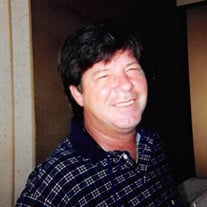 Kelly Bettis, age 69 of Heath, TX, passed away on March 14, 2022. He was born March 12, 1953, in Groton, CT, son to Jim and Helen Clayton. Kelly worked as an electrical contractor and founded his successful business, Guild Electric, in 1984. He loved the water, and in his spare time, he was an avid boater, fisherman, and golfer. Most of all, Kelly was a loving husband, father, grandfather, great-grandfather, and brother. Kelly is survived by his beloved wife: Terry Bettis; children: Tammy Blake and husband Chris, Ricky Bettis and wife Melissa, Erin Brady and husband William Moore, and Sean Brady and wife Heather; siblings: Helen Scott and Kenneth Bettis; and a host of grandchildren, great-grandchildren, nieces, and nephews. He was preceded in death by his parents: Jim and Helen Clayton; brother: Russell Bettis; and sister: Bobbie. Kelly enjoyed coaching little league sports for Tammy and Ricky in Colts football and Cowgirls softball. Later he mentored his grandchildren in whichever sport they played whether it was softball, volleyball, basketball, or golf. To say he had a passion for winning would be an understatement. Sports or business, he loved winning. He lived long enough to see Tammy and Ricky become successful in life, something he was very proud of. He married Terry in the summer of '99. They both retired shortly after and he spent the last 20 years of his life cruising in Sugar Too, their yacht up and down the eastern seaboard, the Bahamas, and the Caribbean. Later they bought a home in the Colorado Rockies where they spent their summers playing golf and staying out of the Texas heat. He was an amazing man who lived a full and amazing life in the short amount of time he was with us. He touched many lives in his time here and he will not soon be forgotten. May he rest in eternal peace. Funeral services will be held 1:00pm, Monday, March 21, 2022, at Reflections at Rest Haven Funeral Home – Rockwall Location. A gathering of family and friends will be held Monday afternoon, prior to the service, beginning at 12:00pm. Catering to follow.

Kelly Bettis, age 69 of Heath, TX, passed away on March 14, 2022. He was born March 12, 1953, in Groton, CT, son to Jim and Helen Clayton. Kelly worked as an electrical contractor and founded his successful business, Guild Electric, in 1984.... View Obituary & Service Information

The family of Kelly Bettis created this Life Tributes page to make it easy to share your memories.