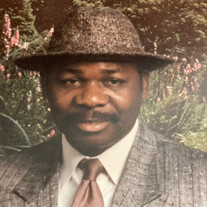 Joseph Olusoji Buoye was born into the family of Late Pa. Solomon and Late Mrs. Deborah Amuke Buoye on July 16th, 1949 in Isanlu-Isin Kwara State of Nigeria. He was the firstborn and son of the Buoye family dynasty. His parents were cocoa farmers and he was raised on the family farm together with his other siblings at Aye-Oba in Osun state, Nigeria. He had five siblings which include Mrs. Funmilayo Akande (also known as Aburo-Olu), Mrs. Rachel Olagunju, Mr. Ayorinde Buoye, Mrs. Mopelola Bamidele, and Mr. Samuel Buoye. He attended Isanlu-Isin Baptist primary school for his elementary and middle school and thereafter went to Ila-Orogun high school for his high school diploma. He was born into a Baptist family and started attending Baptist church from a young age where he accepted Jesus as his Lord and personal Savior. Joseph Olusoji loved his country from a tender age and with this patriotism, he joined the Nigerian Army as a young adult and rose to high military ranks. He was deployed to many war zones such as the Nigerian civil war that took place between the 6th of July, 1967, and the 15th of January, 1970. One of his favorite stories about his military experience was how he escaped death three times during his deployment. He decided to pursue other career opportunities after the civil war and, he was discharged with honor from military service. He worked for the Federal Ministry of Trade and Industry as a personnel analyst for many years, he retired as a civil service employee. In the late 70s, he heeded the call to preach the gospel and start humanitarian service with the testimony of how God preserved his life during military service. He preached and taught many people the Bible while trying to educate them about western education at the same time. He was a first-generation scholar in his family and became a pacesetter for his siblings and others in his local community. He was a founder of a fellowship for Christians in the early 80s at the city of Ilorin in Kwara State, Nigeria. In the early 80s, he came to the United States of America as a student. He had a college diploma and worked for many manufacturing companies. He later went to a theological college for a diploma in leadership and was ordained as a Reverend in his local community church. He served as both a Pastor and Elder for Christ Apostolic Church (CAC) both in Nigeria and the USA. He started his own business enterprise in the early 90s, he provided cleaning services for corporate buildings and, operated a transportation business by providing logistic services for Nigerians that wanted to buy a commercial bus for transportation in Nigeria, he also managed a fleet of vehicles for local transportation until he retired. Joseph Olusoji Buoye got married to Mary Modupeola Buoye nee Abifarin in the late 70s, the union produced four kids named Ayodele, Femi, Tobi, and Mayowa with many grandchildren. Funeral services will be held at 10:00am on Saturday, June 5, 2021, at Reflections at Rest Haven Funeral Home-Rockwall Location. Interment to follow in Rest Haven Memorial Park. A Gathering for family and friends will be held on Friday, June 4, 2021, from 1:00 to 4:00 pm at The Gathering at Rest Haven Funeral Home-Rockwall Location. The service will also be live-streamed; please go to www.oneroomstreaming.com and click on the "watch your service" icon and use Event ID: resthavenrockwall Password: 1BAF5D Zoom live-stream is available beginning at 11:00am. https://zoom.us/join Meeting ID: 883 1277 8770 Passcode: 1234

Joseph Olusoji Buoye was born into the family of Late Pa. Solomon and Late Mrs. Deborah Amuke Buoye on July 16th, 1949 in Isanlu-Isin Kwara State of Nigeria. He was the firstborn and son of the Buoye family dynasty. His parents were cocoa farmers... View Obituary & Service Information

The family of Joseph Olusoji Buoye created this Life Tributes page to make it easy to share your memories.

Joseph Olusoji Buoye was born into the family of Late Pa. Solomon...