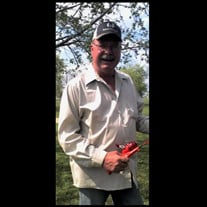 Joseph Christian Armbruster, age 78, of Royse City, TX, passed away March 28, 2022. Joe, or as many of us know him, “Opa”, was born July 30, 1943, in Dallas, TX. He married Penelope “Penny” Elaine Pratley on November 9, 1963. To know Opa was to know the world. He had the kindest soul, the biggest heart, and truly the best stories you have ever heard. Opa was a volunteer of the fire department and the school board, and his love of soccer helped to bring it back to Royse City. He loved his dogs, hunting, fishing, camping, and reading. Opa never met a stranger. He could tell you anything you wanted to know about history, and would give the shirt off his back to anyone that needed. He is survived by a loving family: daughter: Amy Smith and husband Richard; sons: Charles Armbruster and wife Monique, and Andy Armbruster and wife Brandi; nine grandchildren: Amber Garner, Mystee Goodmay, Boomer Streetman, Lauren Armbruster, Mikayla Webster, Blake Armbruster, Miranda Armbruster, John Austin, and Emily Smith; seven great-grandchildren: Gage Lamb, Rhys Garner, Mikah Garner, Larra Garner, Greysen Goodmay, Mikey Webster, and Leighton Armbruster. He was preceded in death by his wife: Penny Armbruster; parents: Ernest and Ida Armbruster; great-grandson: Cade Lamb; and sister: Ida Schultz No services are planned at this time.

The family of Joseph Christian Armbruster created this Life Tributes page to make it easy to share your memories.