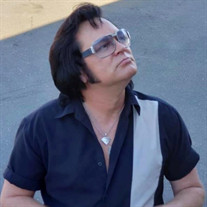 Johnny Lovett, Jr. age 51, of Rowlett, TX, sang his way into Heaven on Monday, September 20, 2021, after battling the vicious octopus called Glioblastoma Multiform also known as GBM, since 2020. He was born on October 3, 1969, in Texarkana, TX. For over 40 years, Johnny entertained audiences as an Elvis Tribute Artist, Country Music Artist and cover tune performer. He was more than just your typical singer that stood behind a guitar and a microphone stand. He was an Entertainer! A showman in every sense of the word and quite possibly one of the best performers and he did so right up until the end. Seeing him once, meant you had to see him again. Johnny was the Son of the world’s first Elvis Tribute Artist. The Late, Great Johnny Harra, who headlined in Las Vegas for many, many years. From the age of two when he learned the words to Elvis Presley’s “Hound Dog” to the first time he performed before an audience in a Nashville talent showcase at age eight, Johnny knew the stage was where he belonged. By age eleven he had his first band and began performing in his hometown of Texarkana and surrounding cities until he had played all that the small towns had to offer. To further his budding career, Johnny moved to Dallas. It didn’t take long before the young Lovett started making a name for himself, performing to hotel showrooms to the halftime show at Texas Stadium for the Dallas Cowboys. After many years singing cover tunes, Johnny decided that it was time to pursue his true passion of doing his own music and in 2004, he did just that. Willie Nelson invited Johnny to perform at his annual Fourth of July Picnic which was held at The World’s Largest Honkey-Tonk, Billy Bob’s Texas in Fort Worth. In 2005, Johnny would again perform with the Texas Legend at the newly renovated Carl’s Corner Truckstop, which was home to a theater called Willie’s Place. The show was a benefit for the victims of Hurricane Katrina and was broadcast on XM Radio live nationwide. 2005 was also the year Johnny released his first single, “Three Feet Tall.” Through the years, Johnny has had the privilege of performing with or opening for many prestigious entertainers in the business. Rock and Roll Hall of Fame guitarist James Burton was quoted saying, “Johnny is a great entertainer.” In 2007 Johnny’s self titled album was released and he was signed to Nashville’s Firebowl Records label in April of 2011. After the release of his first original music album, Country Music Television (CMT) recognized Johnny and graced him with his own artist page on their website. “It is truly an honor to be noticed by CMT and listed among the biggest country music names of all time. It didn’t come easy though, I had to work my tail off to get here.” He also added “I don’t do this to be glorified by people or only for myself, I do this for fans who love country music. The fans have made me what I am. Without them, I’d be nothing”! His music and performances created a loyal following and his natural charisma and stage presence kept an audience captivated. “I don’t know what is gonna happen, but I’m ready for it when it does.” Johnny has worked with or opened for Travis Tritt, Willie Nelson, Clay Walker, Billy Currington, James Burton, Merle Haggard, Noel Haggard; to which he remained very close friends with until the end, No Justice, Los Lonely Boys, Josh Turner, Pat Green, Ray Price, Joe Nichols, Wynonna, Eli Young Band, David Allan Coe, Loretta Lynn, The Bellamy Brothers, T. Graham Brown and The Bart Crow Band, to name a few. Johnny is survived by his loving wife: Michelle Rae Knoeckel Lovett of Rowlett, TX; sons: Derek Quisenberry, Kyle Quisenberry and Coleton Watson (tha boy); daughters: Shayla (Diva) Watson and Lacie (L3) Lovett; granddaughter: Maya Quisenberry; mother: Lou Tassone; brothers: Kenny Wayne Lovett (Nikki), Sonny Lovett, Jimi Walsh, Matt Caldwell (Lisa); sisters: Lisa Marie Lovett-Blakney (Benjie) and Tina Marie Hopkins (Tim); in-laws: Ron and Joyce Anderson of Wylie, TX, and Michael Knoeckel of Garland, TX. He was preceded in death by his Father; Johnny Harra. Funeral services will be held 1:00 p.m., September 27, 2021, Rest Haven Funeral Home, Rowlett, TX, officiated by Blake Farrar. Interment will immediately follow at Rest Haven Memorial Park, Rockwall, TX. Before Johnny was a Star, he was just a human being with a family, so please respect them and their wishes and leave all electronics in your cars, as NO PICTURES OR RECORDINGS OF ANY KIND will be allowed at any of these services! Thank you in advance.

Johnny Lovett, Jr. age 51, of Rowlett, TX, sang his way into Heaven on Monday, September 20, 2021, after battling the vicious octopus called Glioblastoma Multiform also known as GBM, since 2020. He was born on October 3, 1969, in Texarkana,... View Obituary & Service Information

The family of Johnny Lovett Jr. created this Life Tributes page to make it easy to share your memories.