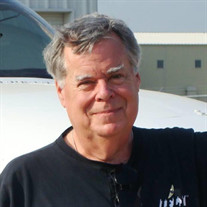 John Edward Wing, age 71, resident of Rowlett, TX, passed away June 5, 2022. He was born November 25, 1950, in Atlanta, GA, to Edward Arthur Wing, Jr. and Joan (Stevenson) Wing. He was a member of First United Methodist Church in Rockwall. John will be deeply missed by all who knew and loved him. John grew up in the Atlanta area and graduated from Lakeside High School in 1968. He met the love of his life, Nancy, when he was only sixteen years old. After being turned down numerous times, John finally convinced her to go on a date with him, and they celebrated their 50th wedding anniversary last August. Having been given a discovery flight at age 14, he was hooked on flying. He completed his first solo flight on his 16th birthday, and he took great pride on the fact that he could fly an airplane by himself legally before he could drive a car. Throughout his early flying days, he worked as a lineman at Epps Air Service at Peachtree Dekalb Airport in Atlanta. He flew as a charter pilot and a corporate pilot after college. He went on to work for Van Dusen Aircraft Supplies, where he started in sales and rose through the ranks to become their National Sales Manager. He later worked for AAR Corporation and Standard Aero before establishing Wing Aero Products, Inc. in 1986. The company was founded with the intent to always treat the customer and his employees with the golden rule in mind. John has flown an airplane from coast to coast, both for business and pleasure. He especially had an affinity for the mountains and the American west. It was often by flying that John and Nancy took pleasure in being able to show their girls the world. Traveling was one of his and Nancy’s favorite things to do together. When they weren’t travelling by air, John enjoyed taking the family on cruises. They have been to all fifty states and thirty-eight foreign countries. John loved introducing people to the joy of aviation, and so many of those he took flying for the first time caught “the flying bug” and entered the industry themselves. In 2017, John received the prestigious Wright Brothers Master Pilot Award, signifying fifty years of safe piloting experience. This rare award has been issued to just over 7,000 pilots in U.S. history. John enjoyed playing golf whenever he got the chance. He would frequently combine his love of aviation with his love of golf and would invite friends on fun golf trips all over the U.S., especially to scenic destinations. His sense of humor was always present in everything he did, and he had the most infectious belly laugh you’ve ever heard. John was the kind of person who made everyone around him feel special. He was affectionately known as “Poppy” to his two grandchildren, and he loved being a grandfather. He dedicated his whole heart to his girls, and everyone who knew him knows that his family was the most important thing in his life. John is survived by his loving wife: Nancy (Lane) Wing; daughters: Kelly Folds and husband Jonathan, and Katie Smith and husband Ben; grandchildren: Matthew Folds and Emily Folds; sister: Susan Palmer and husband Bob; brothers-in law: Steve Lane and wife Marta, and Jeff Lane and wife Molly; and nieces, nephews, and friends who loved him. He was preceded in death by his parents and infant brother, Steven. A celebration of John’s life will be held at 11:00am Saturday, June 11, 2022, at First United Methodist Church, 1200 E. Yellow Jacket Lane, Rockwall.

The family of John Edward Wing created this Life Tributes page to make it easy to share your memories.