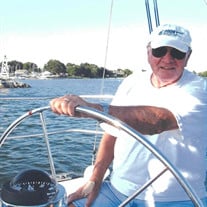 John “Jack” Lewis Progelhof, beloved husband, father, grandfather, and great-grandfather passed away in Rockwall, Texas, on March 22, 2022, at the age of 87. Born on July 8, 1934, to John Carl and Madeline Progelhof in West Orange, New Jersey, Jack was the oldest of two children. He was raised in West Orange and on the Jersey shore where he loved water activities swimming, fishing, and especially sailboat racing. He graduated from West Orange High School in 1952. Jack attended Newark College of Engineering and was president of the Interfraternity Council. He graduated with a B.S. in Mechanical Engineering in 1956 and joined the DuPont chemical company starting at the Niagara Falls chemical plant. Except for a six-month tour in the US Army, Jack worked 37 years for DuPont in engineering and management jobs in Niagara Falls, Memphis, LaPorte (Houston), and Charleston, West Virginia where he served as Assistant Plant Manager. In the summer of 1957, his friend at Bacon Memorial Presbyterian Church introduced him to Virginia “Ginny” Graves, who was home for the summer from Miami of Ohio. They went sailing on their first date. In 1959, they were married at Bacon Memorial Presbyterian. Jack and Ginny were married for 62 years and attended Presbyterian Churches in the variety of cities they resided. Jack owned two boats before he owned a car. Jack, with Ginny crewing, won the Celebrity sailboat class national championship in 1959. Jack won it again in 1964. When the family moved from New York to Texas, he could sail almost year around. He was very active in the Galveston Bay Cruising Association (GBCA) garnering many trophies and served as Bay Race Chairman and Commodore. His boys, John and Jeff, participated in the racing and family fun sailing. After a 3-year stint in sailing-starved Charleston, Jack and Ginny returned to the Houston area and joined Houston Yacht Club where he was an active member and Line Officer before and after his retirement. In 1996, Jack served on the Atlanta Olympic Sailing Race Committee. In 1998, because John moved to the Dallas area where Jeff resided, Jack and Ginny moved to Heath, Texas, and joined Rush Creek Yacht Club. Jack was a very active member racing and volunteering. He opened his garage full of tools to many boat projects for others. Jack was always a loving and supportive husband, father, and grandfather. He was eager to help on projects, support his family, including Ginny in the First Presbyterian Church choir, his sons in sports, and in earning Eagle Scout. He often shared a carton of Blue Bell ice cream with friends and strangers. Jack will be missed by his wife Ginny, his sons and their wives, John and Nancy and Jeff and Erin, his six grandchildren and 7 great-grandchildren. Jacks’ Celebration of Life will be Monday, April 4 at 2:00 pm at Rest Haven Funeral Home – Rockwall with Reverend Harry Meissner presiding. In lieu of flowers, the family requests contributions to an endowment being established for an annual scholarship awarded to youth sailors with a financial need to attend Summer Sailing Camp. For more information, please see https://rcyc.org/event/p7B4XjX0dn. The service will also be live streamed; please go to https://view.oneroomstreaming.com/authorise.php?k=1648676051175677

The family of John "Jack" Lewis Progelhof created this Life Tributes page to make it easy to share your memories.