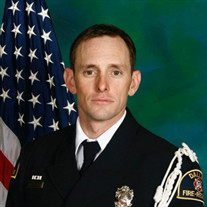 John Kenneth “Kenny” Crutcher age 45, of Wylie, TX, passed away on November 12, 2021. He was born May 6, 1976, in Wichita County, TX. Kenny was everyone’s big brother. He was determined, hardworking, and generous with the heart of a servant. A natural leader and mentor, Kenny was a hero to nearly everyone he befriended. He was an amazing father, friend, and husband. Kenny is survived by his loving wife: Heather Seymour; daughter: Piper Crutcher; mother: Marybeth Crutcher Adams Smith; brother: Cody Adams and wife Tarin; sisters: Britt Green and husband Ken, and Jenell Lafin and husband John; brother: David Seymour; brother Jackson Adams; and a host of nieces, nephews, aunts, uncles, and extended family. Kenny was an accomplished firefighter and soldier. He was with Dallas Fire Rescue since 2002. He worked diligently to achieve the rank of Captain while mentoring those around him along the way. He spent almost 17 years with the National Guard and was very proud to have recently been promoted to First Sergeant. He also served the city of Princeton as Fire Marshal. Other proud moments grew from the instruction and care he provided soldiers and coworkers when needed, and in the tough direction he gave others to help them be stronger. Everything Kenny did was well above and beyond the call of the job. It was never enough to just tell someone a better way to be or to do something. He made sure anyone he helped had the tools and support they needed. And he always followed up to make sure those around him were doing alright, at work and at home. It was very important to him that all his coworkers and friends remember that love and friendship and family come first. His daughter and wife always felt deeply loved and taken care of. His love, guidance, brothering, and most of all laughter, will be deeply missed. Funeral services will be held 10:00 am Tuesday, December 7, 2021, at Lakepointe Church-White Rock, 9150 Garland Rd, Dallas, TX 75218. Interment will be held at Dallas Fort Worth National Cemetery at 1pm. A gathering of friends and family will take place from 4:00 to 6:00pm on Sunday, December 5, 2021, at The Gathering at Rest Haven Funeral Home-Rockwall Location.

The family of John Kenneth "Kenny" Crutcher created this Life Tributes page to make it easy to share your memories.