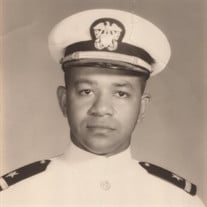 Joe Louis Wilkins, 86, went to be with the Lord on Sunday, May 1, 2022. He was the second of four children, born to James Wilkins and Alberta Washington. Joe was highly intelligent. He was a Bethune scholar in Birmingham, Alabama. This honor was for exceptional African-American students by Mary McLeod Bethune. He was the youngest member of a contingent of scholars that Ms. Bethune took to Washington DC. He was advanced two grades in elementary school, but when the family moved to Cincinnati, he was discriminately set back a grade. Yet, he still graduated high school at 16! Joe went to school for Pharmacology before entering the military. As a young man, Joe entered the Navy. He first served as a corpsman, quickly promoted through the enlisted ranks. When he obtained his bachelor’s degree in Mechanical Engineering, he completed Officer Candidate School (OCS) and then commissioned an Ensign. Eventually, as a Lt. Commander, he served as Ship Engineer on the USS Eversole (DD-789). Joe loved the responsibility of being in charge; he was exceptionally good at it. During his military career, Joe served in the last six months of the Korean War, Vietnam War, and the Cambodian Campaign. After a distinguished career in the military, Joe retired, only to begin a new career as a civilian. Joe’s civilian jobs included: plant manager at both Murray Rubber Company and Igloo Corporation. He also taught Naval Science and Naval ROTC at Miami University (Oxford, Ohio). Joe excelled in everything he pursued. Growing up, my siblings and I marveled and drooled over the numerous delicacies he and our mother cooked up in the kitchen, from chicken and dumplings to the baked Alaska he made for one of our birthdays. How we jumped up and cheered as he set the top of the cake ablaze with a mini blow torch! He was good at sewing, building, and had an amazing second tenor voice. As an Elder in the church, Joe often preached and taught Sunday school, VBS and Wednesday night Bible class. He was a good husband, father, son, and brother. When on frequent six month deployments, he made sure our mother and his five children were provided for. He made up for his time away by backyard camping, frequent BBQs, and vacations, He once took us to see WWF wrestling! Sometimes on the 4th of July, we would sit on our roof with neighbors and watch the fireworks. Other times, he lit off fireworks with us. He always bought the best! He loved both playing and watching sports. In his heyday, he enjoyed bowling, playing racquetball, tennis, and golf. Later in life, his favorite basketball team to watch was the Dallas Mavericks, with the former power forward Dirk Nowitzki (41) as his favorite player. Joe is survived by his sisters: Gwen Jenkins (Joe), Sandra Williams (Jimmie); son: Van Wilkins (Viktoria Caddick); daughters: Melanie Andrews, Kimberly and Margo Wilkins; grand-daughter: Alexandra Andrews; blended family: Dawn Martinez, Jodi Carter (David), Mona Lundy, Tim Rix, Tom Rix (Gina), Danny Rix; and nieces, grand-nieces, nephews, grand-nephews, cousins, and long-time family friends. The Memorial Service will be held 10:00am Monday, May 16, 2022, at Reflections at Rest Haven Funeral Home-Rockwall location. His internment (Full Honors) will take place at DFW National Cemetery. A gathering of family and friends will take place one hour prior to the Memorial service from 9:00am to 10:00am at The Gathering at Rest Haven Funeral Home-Rockwall location. The service will also be live-streamed; please go to www.oneroomstreaming.com and click on the "watch your service" icon and use Event ID: resthavenrockwall and password: ZS9BCJ

Joe Louis Wilkins, 86, went to be with the Lord on Sunday, May 1, 2022. He was the second of four children, born to James Wilkins and Alberta Washington. Joe was highly intelligent. He was a Bethune scholar in Birmingham, Alabama. This honor... View Obituary & Service Information

The family of Joe Louis Wilkins created this Life Tributes page to make it easy to share your memories.