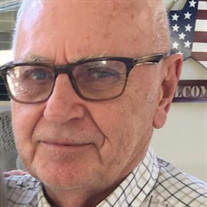 Joe Anton Miklis, of Rowlett Texas, passed away peacefully on August 21, 2021. Joe was born March 16, 1941, in Terrell, Texas, to Anton (Tony) Louis Miklis and Mary Francis Reznicek. Joe grew up speaking Czech as his primary language. He had to overcome the language barrier at school, but that didn’t stop him from graduating from Crozier Tech High School in June 1959 as a member of the National Honor Society and Mensa International. He went on to earn two Associate’s degrees from Eastfield College: one in Science and the other in Automotive Technology. Joe also earned 12 hours in Mathematics and Computer Science from the University of Texas at Dallas, and then 90 hours in Electrical Engineering from the University of Texas at Arlington. Joe proudly served his country in the United States Air Force from 1962-1966, attaining the rank of Senior Airman. Joe met Mary Alice Wallace on July 1, 1965 and they married December 17, 1966. They had two daughters, Anita Jo and Amy Jo. Joe was a pillar of hard work. He spent 35 years of his professional career with an energy provider overseeing electrical, chemical, and water at the time of his retirement. Joe was also a teacher at a college, handyman, mechanic, artist, inventor, and hero, saving a man’s life after his truck caught fire. He was generous with his time and talents, helping many whose paths crossed his. Joe was a philanthropist and donated to a long list of charitable organizations. He enjoyed being with family and friends, fishing, working on his farm, and bird hunting with his dad. Joe was a believer and an active member of Buckingham Road Church of Christ, where he and Mary have been members since 2004. Joe was preceded in death by his parents, Anton (Tony) Louis Miklis and Mary Francis Reznicek; stepmother, Sophie Tabor Miklis, and stepbrother, Lee Roy Miklis. Joe is survived by his wife of 56 years, Mary Alice Miklis of Rowlett; children, Anita Owen and fiancé, Todd Hinkle, of Rockwall, and Amy Peterson and husband, John, of The Woodlands; grandchildren Savannah Raye Owen and Avery Elizabeth Peterson. A memorial service will be held at 10:00 am on Monday, August 30, 2021, at Rest Haven Funeral Home – Rowlett, Texas. Interment will follow at 1:00 pm at Dallas/Fort Worth National Cemetery. The service will be live streamed and can be viewed at www.oneroomstreaming.com Click on "watch your service" and use Event ID: ResthavenRow Password: V9FKBO

The family of Joe Anton Miklis created this Life Tributes page to make it easy to share your memories.

Joe Anton Miklis, of Rowlett Texas, passed away peacefully on...