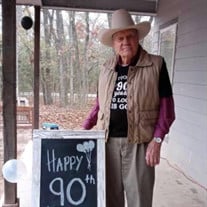 Joe Ben “Papa Joe” Combs, age 90, of Rockwall, TX, passed away on June 3rd, 2021. He was born December 20, 1930, in Hopkins County, TX, to Ollie and Leona (Bradford) Combs. His presence will be deeply missed. Joe is survived by his children: Cindy Welborn and husband Keith of Rockwall, Tx; Craig Combs and wife Marcylle of Argyle, TX; and Clay Combs and wife Michele of Colorado Springs, CO; stepchildren: Brenda Turner of Oak Cliff, TX, Shirley Lynch of Maybank, TX, and Buck Webber of Palestine, TX; and 20 grandchildren, 28 great-grandchildren, and 2 great-great-grandchildren. He was preceded in death by his wife: Nina Combs; three brothers: Jim Tom, Monroe, and Orval Combs; sister: Lorene Wood; stepdaughter: Billie Hankey; and his parents. Joe Ben Combs, known as “Papa Joe” to all who knew and loved him, was a man of humor and good times. He loved his family dearly! He would typically say, “I’m responsible for ALL this!” (Referring to the siring of all his kids and grandkids and all that resulted from it). He loved telling jokes and making people laugh…even if it was the same joke again and again and again! He was a natural musician. He could play almost any instrument he picked up! The ones we heard him play were guitar, mandolin, harmonica, and piano. As a young man, he would sit down in public and simply play any piano that might be sitting idle. He was also an avid hunter and outdoorsman and instilled the love of both in his children and grandchildren, all of whom have fond memories of times spent afield and around campfires telling and listening to all manner of true and fictional stories and tales that brought wonder and laughter. “Papa Joe” loved his milk and cookies for “supper” and his ice cream and milk for “dessert”. Before his 70’s, he loved his Lovera tipped cigars and Falstaff beer. After that, it was Coors Light, which eventually gave way to unsweet tea. Papa Joe was a master craftsman with both heating and air as well as electrical construction. He worked well into his 80”s because those who depended on his expertise wouldn’t let him retire. Many sought his advice and skill on electrical wiring. He taught his sons electrical and construction work and had a high standard for life and love for all his children. Papa Joe would not back down from trouble. If he felt he was wronged, he would pursue justice no matter the cost. Papa Joe gave love freely to his children, stepchildren, grandchildren, and great-grandchildren. They loved him much in return. His daughter, Cindy, was the light of his life and, in his later years, has ably and tirelessly been by his side as his main caretaker! Papa Joe loved people and they adored him. He “filled up the room” whenever he entered and there will be a distinct void without him. Funeral Service Saturday, June 5th, 11:00 am Blue Moon Creek 10501 Fincher Road, Argyle, TX Interment Saturday, June 19th, 11:00 am Pine Forest Chapel and Cemetery Weaver/Pickton at FM 269 S. Pickton, TX 75471 In lieu of flowers, donations may be made: Rockwall Meals on Wheels https://rockwallmealsonwheels.org/ Mary Kay Foundation https://www.marykayfoundation.org/

The family of Joe Ben "Papa Joe" Combs created this Life Tributes page to make it easy to share your memories.