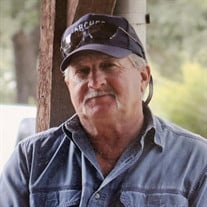 Jerry H. Archer was born May 31, 1950, to Iva Jo and Lloyd Archer. He passed away on December 2, 2021. Jerry is survived by his wife Diane Nevels Archer, son Jerry Lloyd Archer, daughter-in-law Hollie Archer, grandchildren Slayden, Sutton, Seely and Spencer, son Matt Luther, Matt’s fiancé Kaci Stanley, grandchildren Jackson Stanley, Jase Stanley, and Taylor Monroe Luther. Jerry is preceded in death by his parents and son Taylor Luther. Jerry was born in Terrell, Texas. He grew up in Rockwall. After graduating from Rockwall High School, he worked in different businesses before becoming a deputy sheriff and investigator for Rockwall County Sheriffs Department. In 1975, Jerry opened his business in Rockwall, Archer Texaco, which became Archer Car Care. Jerry had a love for fast cars, which led to many years of drag racing. He also played golf and enjoyed woodworking. He was avid about fishing, especially for bass. The fishing hobby is what led him to Lake Fork. He fished tournaments there through the years. He and his wife Diane spent many weekends at Lake Fork with a large group of friends. Many wonderful memories were made there. The family requests that in lieu of flowers, donations may be made to: Ridin High Cowboy Church Arena Fund 8771 FM 35, Royse City, TX 75189 RidinHighCC.com Funeral services will be held 10:00am on Wednesday, December 8, 2021, at Reflections at Rest Haven Funeral Home-Rockwall Location. Visitation will be held 6:00-8:00pm on Tuesday, December 7, 2021, at The Gathering at Rest Haven Funeral Home-Rockwall Location. Interment to follow in Rest Haven Memorial Park.

The family of Jerry Herron Archer created this Life Tributes page to make it easy to share your memories.