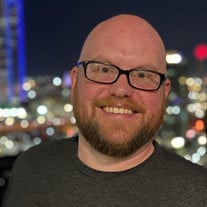 Jason Michael Ferguson, 41, of Rowlett, Texas, passed away suddenly on June 6, 2022, surrounded by family and friends. He was born to parents Justin and Donna Ferguson, on December 22, 1980, in Garland, Texas. Michael graduated from Rockwall Christian Academy and received his Bachelor of Arts in Historical Studies and his Master of Arts in History from the University of Texas at Dallas. He also received his PhD ABD in American History from University of North Texas in Denton, and planned to defend his dissertation this fall, thereby completing his doctorate degree. He was a professor of U.S. History at Collin College since 2013, and some of his teaching specializations included U.S. History Surveys, Post and Pre-Reconstruction, 20th Century American History, American Military History, African American History, Western Civilization, and Ancient Greek and Roman History. He was loved by his students and was passionate about teaching. From a young age, Michael was fascinated with reptiles and aquariums. He also loved music and was a talented singer and bassist. In recent years, his favorite things to do included working his parents’ land in Oklahoma, hunting with his dad, binge watching shows with his wife, “tickles” with his kids, and hanging out and laughing with his friends and family. Michael was truly one-of-a-kind. He was a loving and devoted husband, father, son, brother, uncle, cousin, friend, and teacher. He will be dearly missed by all who knew and loved him. Michael is survived by Adrianne Diane Gray Ferguson, the love of his life, whom he married on Valentine’s Day in 2004, and his sons, Jude Michael Ferguson, age 9, and Joel Garrett Ferguson, age 7. He is also survived by his parents, Justin Michael Ferguson and Donna Van Buskirk Ferguson, his brother Jonathan Ferguson and his expectant wife Bethany, their children Micah, Katie & Nathan, his sister Meagan Noel and her husband Daniel, their children Ebbie and Pierce, his mother-in-love Tonie Gray, and his many beloved aunts, uncles, cousins, brothers-in-law, sisters-in-law, nieces, and nephews. Michael was predeceased by his fraternal grandparents, Jack Wayland Ferguson and Anna Mary Gregory, and his maternal grandparents, Brian Clark Van Buskirk and Nancy Jan Harris. A visitation will be held on Sunday, June 12, 2022, from 5:00pm-7:00pm at: Rest Haven Funeral Home 2500 State Highway 66 Rockwall, Texas 75087 A memorial service will be held on Monday, June 13, 2022 at 1:00pm at: Lakeshore Church 5575 State Hwy 205 Rockwall, Texas 75032. Many have asked how they can help support Adrianne and their two sons, who are both on the autism spectrum, as they go through this very difficult time. A fund has been set up through Lakeshore Church in Rockwall, and all proceeds will go to Adrianne to help their boys’ continued care. To donate, click the link below, use the “Fund” drop-down menu and select “Memorial”. https://www.kindridgiving.com/app/giving/kindrid-xe3k13p

Jason Michael Ferguson, 41, of Rowlett, Texas, passed away suddenly on June 6, 2022, surrounded by family and friends. He was born to parents Justin and Donna Ferguson, on December 22, 1980, in Garland, Texas. Michael graduated from Rockwall... View Obituary & Service Information

The family of Jason Michael Ferguson created this Life Tributes page to make it easy to share your memories.