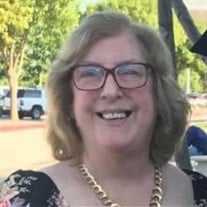 Jane Marie Wible, Age 75 of Rowlett, TX passed away peacefully with her daughter and grandchildren by her side on December 10, 2021. She was born June 12, 1946, in Mckeesport, PA to George and Catherine (Connelly) Piper. Jane attended St. Peter’s Catholic High school and was part of the class of 1964. On April 16, 1966 she married her soulmate, Michael Wible. She moved to Texas in 1978 with her husband Mike and two kids, Janeen and Eric. Upon her arrival she began her career with JCPenney and retired in 2003. Jane was an active member of St. Michael Catholic Church, where she served as a eucharistic minister and was a loyal member of the crafting group. Jane was an extremely dedicated mother and grandmother and spent her days caring for and supporting her children and grandchildren. Jane was the center of her family and a light to everyone around her. She was never hesitant to lend a helping hand or a shoulder to cry on. In her spare time Jane enjoyed true crime shows, crafting, traveling, bingo, and was an avid sports fan. She cheered on the K-State Wildcats, the Texas Rangers, The Dallas Mavericks, the Pittsburgh Pirates, the Pittsburgh Steelers, and of course the Dallas Cowboys. Her favorite fun activities included going shopping, taking trips to the casino, and spending time with her family. Jane is survived by her daughter: Janeen Whitmore (David) Grandchildren: Dillon Vera and Lindsey Pantoja; Sister and Niece: Colleen Lief and Jasmine Lief; Brothers and Sisters-in-law: Robert (Marianne)Wible, Regina Thorne, Patricia (Pete)Burns, Kathy Kiggins, Carol (David)Drank and Bernadette Wible and brother, Tom Piper. She was preceded in death by her parents, her husband Michael and son Eric Michael Wible. Funeral services will be held 10:00am Thursday, December 16, 2021, at St. Michael Catholic Church. With a graveside service following at Restland Funeral Home & Cemetery at 3:00pm. Visitation is Wednesday at Rest Haven Funeral Home-Rowlett Chapel from 6:00 to 8:00pm with a rosary at 7:00pm.

Jane Marie Wible, Age 75 of Rowlett, TX passed away peacefully with her daughter and grandchildren by her side on December 10, 2021. She was born June 12, 1946, in Mckeesport, PA to George and Catherine (Connelly) Piper. Jane attended St. Peter&#8217;s... View Obituary & Service Information

The family of Jane Marie Wible created this Life Tributes page to make it easy to share your memories.