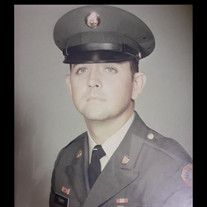 James Ronald Terry, 78, of Garland, TX, passed from this life on June 24, 2021. He was born in Dallas, TX, to Elijah Waymond Terry and Lessie Aileen (Evans) Terry, on May 17, 1943. Following High School, Ron attended North Texas University and began his professional career with Sterling Jewelers. Ron was drafted into the U.S. Army in 1966, where he proudly served the country he loved, and was honorably discharged in 1972. Following Military service, Ron became president of Schoellkopf Company in Dallas. Ron eventually created and ran his own company, R.T. Cable Ads until his retirement. Ron is survived by his loving wife of 57 years: Johnnie Gale Terry; son: Kenneth Lane Terry and wife Lisa; grandchildren: CJ Rather, Abby Rather, Jacob Rather, Miranda Terry, Laura Gale Terry, and Kimberly “Kimber” Terry; brother: Kenneth Waymond Terry and wife Sandy; and sister-in-law: Sue Tennison; along with a host of nieces, nephews and cousins who will all miss him dearly. Ron is preceded in death by his parents, Waymond and Aileen Terry; daughter; Kimberly Terry; and sisters: Barbara Mitchell, Betty Lofland, and Charlotte Garrett. A funeral service is to be held on Monday, June 28, 2021, at 1:00 PM, at Reflections at Rest Haven Funeral Home – Rockwall location, with Pastor Robert Doleshal officiating. The family will receive friends and loved ones at the conclusion of the service in the Gathering at Rest Haven until 3:00 PM.

The family of James Ronald Terry created this Life Tributes page to make it easy to share your memories.

James Ronald Terry, 78, of Garland, TX, passed from this life...