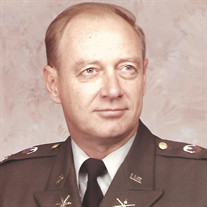 Retired Colonel James Ernest Rambo was accepted into the arms of our heavenly father on July 22, 2021, at the age of 86, in Rowlett, Texas. He was born on June 11, 1935, in Galveston, Texas, to Margaret Ruth Guenther Richardson Rambo and Ernest Steele Rambo. He graduated from Texas A&M, Class of 1957, and went on to serve for 25 years in the United States Army, where he held several critical field commands and was highly decorated, including The Legion of Merit award. In addition, during that time he obtained his Master’s degree in 1972 from the University of Texas at El Paso. Later, as a civilian, he entered the field of research and development, as researcher and inventor of unmanned systems with SAIC, Westinghouse, and Northrup Grumman, becoming President and CEO of REMOTEC in May, 1996, the world leader in development and manufacturing of mobile hazardous duty robots, providing explosive ordinance handling robots to the US Department of Defense and 25 foreign countries. Upon retiring, he and his wife of 47 years, Barbara Ann Priddy Rambo, who preceded him in death on September 4, 2020, made their home in Clinton, Tennessee, where they lived for over 20 years. It was in Clinton that he developed his interests in the symphony, the opera, woodworking, adding the piccolo and the flute to his forte of musical talents, and becoming an expert Case knife collector. In addition to his mother and father, Mr. Rambo was also preceded in death by his eldest son, Michael D. Rambo, his brother, Charles D. Rambo, and his half-brother William (Bill) C. Rambo. Mr. Rambo is survived by four of his children, Cheryl Gerber, Bonnie Binder, Debra Cleek, and Kenneth Rambo, their respective spouses, a daughter-in-law, Mary Margaret Rambo, 12 grandchildren, 10 great grandchildren, and his half-brother Robert (Bob) B. Rambo, along with his wife and daughters. He also leaves behind many wonderful neighbors and friends in his hometown of Clinton, Tennessee. Inurnment is scheduled at Fort Sam Houston National Cemetery, San Antonio, Texas at 1:00pm, Monday, April 18, 2022.

Retired Colonel James Ernest Rambo was accepted into the arms of our heavenly father on July 22, 2021, at the age of 86, in Rowlett, Texas. He was born on June 11, 1935, in Galveston, Texas, to Margaret Ruth Guenther Richardson Rambo and Ernest... View Obituary & Service Information

The family of James Ernest Rambo created this Life Tributes page to make it easy to share your memories.

Retired Colonel James Ernest Rambo was accepted into the arms...