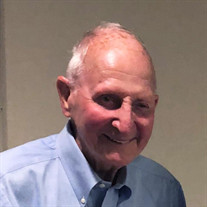 James “Jim” Green was born February 5, 1928, in Greenville to Jack and Mable Coleman Green. He died on April 13, 2021, at the age of 93. He is survived by his seven children: Jane Anderson and Archie, Mike Green, Sara Green, Janis Green, Pat Green, Jerry and Betsy Green, and Margaret Jones and Andy; 13 grandchildren and 17 great-grandchildren. He was also blessed to have amazing neighbors, Toby and Mandy Lester and Doyle and Sharon Crawford, plus others that often checked on him. Jim grew up in Nevada and graduated from Nevada High School. He was a proud veteran of World War II, serving with the Navy in the South Pacific. He married Lula Margaret Smith in 1948, began his college years and graduated from Sam Houston State University in 1951. He taught at Rosebud Junior High for one year and in 1952 he went to work for the U.S. Dept. of Agriculture for 33 years. During these years he was an active church member, instilling the importance of God in his children’s lives. He also modeled a strong work ethic and high expectations for all. He was also a Scoutmaster, a member of the school board, and served on many nonprofit committees. In 1979 Jim received the national Superior Service Award and numerous other awards through the years. In 1983, Jim retired and moved to Evergreen Farm near Caddo Mills. He continued to work in the church, teaching a men’s Bible class. He was instrumental in establishing the Caddo Mills Senior Center, worked with the American Heart Association, Salvation Army, and Audie Murphy/American Cotton Museum. At First Baptist Rockwall he served as a teacher of a couples’ class, a greeter, and an usher, which gave him great pleasure. The family would also like to extend a special thanks to the staff of Kindred Hospice for the compassionate care of Dad and our family. He was preceded in death by his parents; his wife, Lou of 70 years; his sister, Melba Clifton; and a grandson, Christian Green. Graveside services will be held at 2:00pm, Thursday, April 22, 2021, in Nevada Cemetery.

The family of James "Jim" Green created this Life Tributes page to make it easy to share your memories.