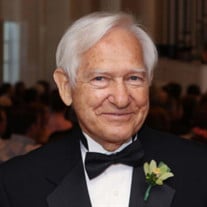 Dr. James W. Dyll of Heath, TX, known affectionately by all as “Jim” passed away on April 8, 2021, at the blessed age of 90. Jim was born February 1, 1931, to Louis Martin and Rosina Dyll, in Detroit, Michigan. The world was just emerging from the Great Depression when Jim was born, and Jim’s parents, “Martin” and “Rose,” made every effort to instill in him Christian values, a strong work ethic, and an education. Jim made the most of everything they provided. A proud Wolverine through-and-through, Jim attended the University of Michigan where he earned his medical degree. He then completed his residency in neurosurgery at the University of Iowa and went on to establish a family-run medical practice “Dyll and Dyll” in Dallas, TX where Jim practiced neurosurgery and his brother, Louis Dyll, practiced neurology. Jim practiced neurosurgery at Baylor University Medical Center for over 30 years. There, he met the love of his life, Ann Dyll, who was the Administrative Supervisor of the Jonsson Hospital at Baylor. They were married on January 1st, 1977 in the midst of one of the worst ice storms that Dallas had ever seen. They hosted the reception afterward at their newly constructed house in Rockwall, TX. In one of Jim’s favorite stories, the bandleader when faced with a power outage from the ice storm, came to Jim complaining that, without power, the band’s electrical instruments could not function. Jim replied (while holding a blow torch on a frozen pipe) in his tux: “Listen, you’ve got your problems, and I’ve got mine.” Despite the challenges that night, the power was restored, and it became the most memorable party of all the many parties ever had at the Dyll household. Jim thrived on life. He helicopter-skied in the Canadian Bugaboo Mountains, swam with iguanas in the Galapagos islands, biked across Europe, horse-backed through the backwoods of the Bob Marshall Wilderness in Montana, and boated up the coast of British Colombia in his own boat with his wife, in just some of his many adventures. Jim traveled the world and loved to tell stories of his journeys. But after all of that, Jim found his true passion: his children. Whether it was pounding nails in his shop with Tim, playing the piano with Nicole, or fly fishing with Crystal, Jim never missed an opportunity to pour his life into them. “Don’t say ‘no’ if you can ever say ‘yes’” he once told Ann, and it was the motto by which they raised their family. Jim’s children were by far the greatest accomplishment of his life. Jim’s strong Christian faith was, and is, a source of comfort and strength to all those around him, most of all his family. We will truly miss you, but only for a time until we see you again: husband, dad, grandpa, and friend. “You will go out in joy and be led forth in peace; the mountains and hills will burst into song before you, and the trees of the fields will clap their hands.” Isaiah 55:12 Jim is survived by his loving wife of 43 years Ann Dyll; son Timothy Dyll and wife Lindsey; daughter Nicole Story and husband Brett; and daughter Crystal Dyll; as well as granddaughters Avery Lane Dyll and Riley Kay Dyll. Private family services will be held, and the family requests any donations in Jim’s memory go to the Oklahoma City Heart Hospital (https://www.okheart.com/research/make-a-donation), where he received amazing care.

The family of Dr. James W. Dyll created this Life Tributes page to make it easy to share your memories.

Dr. James W. Dyll of Heath, TX, known affectionately by all as...