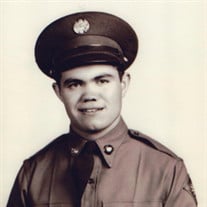 James Dennis, age 93, went to be with the Lord on February 27, 2022. He was born June 14, 1928, in Elk Prairie TWP, IL, to Verner Dennis and Edith Edna (Vaughn) Dennis. James graduated from Crozier Tech High School. After graduation, he attended a vocational school where he learned cabinetry, upholstery, and furniture repair. He joined the Army and was a PFC in the Heavy Mortar Company of the 160th Infantry during the Korean War. James married Paula Mavis Shelton on October 10, 1952, and they raised their family in Mesquite, TX. He was a charter member of Eastfield Baptist Church in Mesquite. James had a long career working for Gould National Battery until his retirement in 1990. James loved old western movies, hunting, cattle ranching, reading, and traveling. He was a big fan of the Cowboys and the Texas Rangers. He will be deeply missed. James is survived by his loving wife: Paula Dennis; son: Tim Dennis and Lana Dennis; son: Russell Dennis and wife Brenda; daughter: Deedra Clark and husband R.L.; sister: Lucille Withrow; six grandchildren; eight great-grandchildren; four great-great-grandchildren; and many nieces, nephews, family, and friends. He was preceded in death by his sister: Emma Jean Wheat; brother: Verner (Bill) Dennis; brothers-in-law: Leonard Wheat and Leslie Withrow; stepfather: Johnny Vestal; and his parents: Verner Dennis and Edith Dennis Vestal. Funeral services will be held 10:00am Monday, March 7, 2022, at Reflections at Rest Haven Funeral Home-Rockwall Location. Interment will follow at 2:00pm in Grove Hill Cemetery, Dallas, TX. A gathering of friends and family will take place prior to the service beginning at 9:00am. The service will also be live-streamed; please go to www.oneroomstreaming.com and click on the "watch your service" icon and use Event ID: resthavenrockwall and password: 8CDNBP In lieu of flowers, donations can be made to Bright Focus Foundation (support.brightfocus.org/ donate) in honor of James Dennis.

James Dennis, age 93, went to be with the Lord on February 27, 2022. He was born June 14, 1928, in Elk Prairie TWP, IL, to Verner Dennis and Edith Edna (Vaughn) Dennis. James graduated from Crozier Tech High School. After graduation, he attended... View Obituary & Service Information

The family of James Kenneth Dennis created this Life Tributes page to make it easy to share your memories.