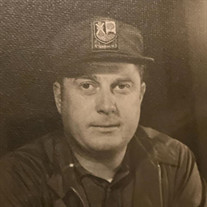 J. Van Greenly, age 90, passed away on February 4, 2022. He was born January 8, 1932, in Akron, Ohio, to Russell James Greenly and Anne Frances (Hoover) Greenly. He will be interred in New Britain, Pennsylvania next to his father. He is survived by his children: Russell James Greenly II (Linda), Elizabeth Ann Rock, Suzanne B. Greenly (Patrick Hahn), and Kristin M. Greenly Escobar (Clark Reddaway); grandchildren: Raul Jason Escobar, Kari Lee Thorsteinson Hahn (Elgin Dean), Megan Kristin Dunbar Hahn, Anna Mercedes Brix Hahn; and great-grandchildren: Alexandria Pinard Magnus Dean-Hahn and Hazel Lee Sumoge Dean-Hahn. He was preceded in death by his parents, his beloved wife: Joan Elizabeth (Thorsteinson) Greenly, and grandson: Kristian Erik Escobar. He graduated from Purdue in West Lafayette, Indiana in 1953 with a degree in Mechanical Engineering. Van and Joan married on June 27, 1953, in Pittsburg, Pennsylvania. He was enlisted in the Air Force and was discharged as a Second Lieutenant. He went on to work for Jones and Laughlin Steel Corporation that merged with LTV and retired in 1988. During his life, he lived in Pennsylvania, Indiana, Kansas, Nebraska, Oklahoma, and finally Texas. He and Joan were avid travelers, exploring Ireland, England, Spain, Portugal, Mexico and fulfilling a lifelong dream of golfing at St. Andrews in Scotland in plus fours. They traveled to Alaska for over 20 years, meeting up with family and making good friends. From the kids' perspective, we were the recipients of the travel bug, new and exciting foods (recipes) from these travels including scotch eggs, oysters, lobster, roast beef, and Yorkshire pudding. Life was lived and explored through food and we came to associate the places traveled with the food!!! Van was involved with the Shriner's Organization and Scottish Rite Masons receiving the 32nd degree in Omaha, Nebraska. He enjoyed water walking, golf, football, and a good cigar until Kris told him he couldn’t smoke them anymore!!! Van was heavily involved with Friends of Bill for over 33 years. He made a home for himself at the Addison Group (Texas) and was one of its long-serving members. The April 9 date is dear in all our hearts as this was the day he began his true service to others and the family. A celebration of Van's life will be held 1:00pm Saturday, April 9, 2022, at Reflections at Rest Haven Home-Rockwall location. In lieu of flowers please contribute to …… The Magdalen House, 4513 Gaston Ave, Dallas, TX. 75246, Shriners Temple 2823 S. 84th Street, Omaha, NE 68124, Boy Scouts of America in Nome, Alaska c/o Charlie Lean, P.O. Box 1716, Nome, AK 99762, or your favorite charity in Van's name. or please send checks to Kristin M. Greenly Escobar 2916 Starboard Drive Rockwall, Texas 75087 The service will also be livestreamed please click on the following link: https://view.oneroomstreaming.com/authorise.php?k=1646268334170291

J. Van Greenly, age 90, passed away on February 4, 2022. He was born January 8, 1932, in Akron, Ohio, to Russell James Greenly and Anne Frances (Hoover) Greenly. He will be interred in New Britain, Pennsylvania next to his father. He is survived... View Obituary & Service Information

The family of J. Van Greenly created this Life Tributes page to make it easy to share your memories.