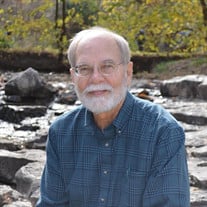 Howard Allen Inman was born on January 8, 1949 in Fort Worth, Texas to George and Lois Inman. A few years later, twin brother and sister, Clyde and Carol, joined the family. Together they enjoyed going to church, playing with cousins and Uncle Richard, visiting Moms (grandma) in Graham, Texas, and taking family vacations. Throughout childhood, Howard enjoyed football and years of Boy Scouts; he especially loved the campouts. He attended Arlington Heights High School in Fort Worth, Texas then moved to Tulsa, OK where he graduated from Nathan Hale High School in 1967. Howard earned a Bachelor of Science in Pharmacy from the University of Oklahoma and was excited and proud to begin work as a pharmacist. He continued his career for 43 years before retiring. During his time at OU, he met Ginger Mae Taylor, the love of his life. They married on August 15, 1970 and began their life together in student housing at OU while they completed their degrees. After graduation, Howard and Ginger moved to Texas. In 1976, Howard added “Daddy” to his titles, as Jill Annette was born, followed by Lisa Rene’ and Diana Kathleen. He was devoted, caring, involved, and protective while also teaching strength and independence to his daughters. He never missed a game or performance and always made time for ski trips, family vacations, and many Daddy-Daughter activities. In 2002, Howard became “Grandad”, one of his favorite titles. He was blessed to have eight grandchildren: Alyssa, Kayla, Asher, Allen, Juliana, Isabel, Nora, and Luke. Howard loved and enjoyed his grandchildren, and they treasured the time with him doing puzzles, playing hide and seek, celebrating birthdays, holidays, and having a captive audience as they performed for Grandad. As a faithful Christian, Howard followed the example of Jesus to serve others. Like his father, George, he thoroughly enjoyed mission work alongside his fellow “God’s Old Geezers” and many dear friends as they built wheelchair ramps, repaired communities after disasters, and helped those near and far. He was a dedicated member of First United Methodist Church of Garland for 32 years. In addition, Howard was an excellent woodworker. He masterfully used his skills at home and shared his knowledge with his children and grandchildren. He enjoyed working in the yard maintaining a beautiful landscape. Other hobbies included stamp and coin collecting, playing golf, reading, and men's breakfast clubs. Howard passed on August 8, 2021 at home with his family by his side and under the care of his attentive and loving wife. He was strong and courageous throughout his life and especially during his long battle with cancer. Howard was dearly loved by his many friends and family. He is survived by his devoted wife of more than 50 years, Ginger Inman; daughter, Jill Olthouse and husband, Robert, daughter, Lisa Baez and husband Christian, daughter Diana Frankenfield and husband Jason, 8 grandchildren; sister, Carol Gillis and husband Stephen; brothers Clyde Inman; Jeff Lane and wife Kim; John Lane and wife Leticia; sisters and brothers-in-law, Lonnie Taylor, Donna Sue and Ellis Couch, Cassie and Troy Reed, Vicki and Jon Jones, and Judy and Philip Lee; Aunt Bobbye Lott; Uncle Richard Crawford and wife Vivian; numerous nieces and nephews, other family members, and many sweet, supportive, close friends. He was preceded in death by his parents, George and Lois Inman; grandmother, Allie Cates; step-mother, Judy Inman; parents-in-law, Louie and Mildred Taylor; and other relatives including: Thelma and Jim McWater, Raymond and Francis Taylor, Clara Taylor, Cynthia Taylor, Bradley Couch, Derek Reed, Craig Reed, Andrew Lee, and other extended family. A Celebration of Life will be held 1:00 pm Saturday, August 14, 2021, at Rest Haven Funeral Home in Rowlett with Rev. Clay Womack officiating. Memorials may be made in Howard’s honor to the Habitat for Humanity Dallas www.dallasareahabitat.org The service will be live streamed at www.oneroomstreaming.com. Click on "watch your service" and used Event ID: ResthavenRow and Password: GWL4VN

Howard Allen Inman was born on January 8, 1949 in Fort Worth, Texas to George and Lois Inman. A few years later, twin brother and sister, Clyde and Carol, joined the family. Together they enjoyed going to church, playing with cousins and Uncle... View Obituary & Service Information

The family of Howard A. Inman created this Life Tributes page to make it easy to share your memories.