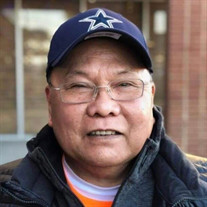 Hilario Manzano Cortez, 81, of Forney, Texas, beloved father and grandfather, went home peacefully to be with the Lord on November 28, 2021. He was born in Tarlac, Philippines to the late Felix Cortez, a retired US Navy and Emiliana Manzano Cortez. In 1961, Hilario met his wife, Epifania Alferos Cortez and went on to have seven children. Hilario put his family first, always, and was a dedicated father, grandfather, and husband. His children and grandchildren tried to shower him with as much love after the passing of his wife Epifania in 2012, in order to keep up his strength after losing his soulmate. Hilario’s hard work and guidance were the foundation of his family. He was a strong, kind, loving, and supportive father. He dedicated his life to providing for his family. He was a Foreman at Interphil Laboratories Engineering Department in the Philippines, a US pharmaceutical manufacturing company. In 1995, he retired after 33 years of service at the age of 55 and migrated to the United States. When Hilario and his wife Epifania moved to Hawaii in 1995 to be with one of their children, Anna, a Registered Nurse, Hilario worked for several more years, first at YMCA in Honolulu, and then at Albertsons in Dallas, Texas before fully retiring in 2007. With his hard work and perseverance, he was able to bring three of his youngest children to the US, Hilda, Ron and Jromo. In his retirement, Hilario spent most of his time basking in the joys of having his grandchildren and children around him. He enjoyed reading the Bible every day, listening to music, watching TV, especially sports, and attending church on Sundays. He was well-loved and respected by family and friends. Everyone who knew Hilario called him “Tatang”, meaning ‘father’ in Filipino language because that was how he was addressed by all of his children and grandchildren. Hilario was predeceased by his wife Epifania, his father Felix Cortez, his mother Emiliana Manzano Cortez, his brother Avelino Cortez, and his daughter-in-law Adelia Suva Cortez. He is survived by his 7 children (two are from the Philippines and five are from Texas): Orville (Ramona), Jefti, Larry (Alpa), Anna, Hilda, Ron and Jromo (Jennifer), along with Richard and Mario who are like sons to him; granddaughters Jedel, Elaydia, Heartiny, Justine, Leechae, Cheska and Bella; grandsons Jonel, Bob, Alfer, Cromwell and Billzon; sisters Mely, Ana, Minda and Ligaya; brother Elias (Letty); as well as many nieces and nephews. He will be cremated and laid to rest at Resthaven in Rockwall, TX on Friday, December 3 to be attended by immediate family members. A memorial service to celebrate his life will be held Saturday, December 4th at 3:00pm at Genuine Faith Community Church - 3809 Park St., Greenville, TX 75401-5010. To Tatang, We love you more than words could ever tell. We thank you for everything, for all the sacrifices, hard work, advice, teachings, and most especially for all the love that you have poured on us. We will always carry your memory in our hearts. Please say “Hello” to Inang from us. We love you, Tatang. Your children

Hilario Manzano Cortez, 81, of Forney, Texas, beloved father and grandfather, went home peacefully to be with the Lord on November 28, 2021. He was born in Tarlac, Philippines to the late Felix Cortez, a retired US Navy and Emiliana Manzano... View Obituary & Service Information

The family of Hilario Manzano Cortez created this Life Tributes page to make it easy to share your memories.