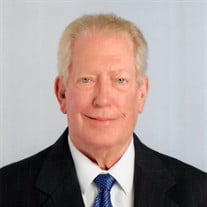 Heath Wood “Woody” Anderson passed away at his home on November 21, 2021, at the age of 70, with his family by his side. He was born January 16, 1951, in Dallas, TX, to James E. and Elizabeth H. W. Anderson, the second of four boys. After graduating from Highland Park High School, he enlisted in the US Air Force and served as a corpsman at Dyess AFB in Abilene, TX. He liked to say that Texas was never invaded while he served. It was at Dyess that he met his future wife, AF Nurse Elizabeth “Lib” Vaulk of Indiana. They were married in 1974, shortly before he was discharged from active duty, and he immediately joined Lib in England as her dependent. After returning to Texas, he graduated from the University of North Texas and embarked upon a successful business career, eventually settling in Rockwall, TX, and then Heath, TX. Woody was born with the Anderson sense of humor and loved to laugh, but he loved his family above all else. Exhibiting an early talent for good-natured mischief with his pals, he grew into a man of strong character, convictions and lifelong friendships. Although he could often be highly opinionated, he didn’t have to agree with someone to love and support them. He was an intense competitor, whether it was tennis, pickleball, skeet or hunting. With his strong love of skeet and his giving spirit, he dedicated his time and talents as President and Secretary-Treasurer of the Texas Skeet Shooters Association and President and member of the Board of Directors of the Dallas Gun Club. He was inducted into the Texas Skeet Shooters Association Hall of Fame in 2011. Woody is survived by his wife, Elizabeth “Lib” Anderson, and son, James Eric Anderson (Keri) of Heath. He is also survived by his grandchildren: Kristina, Alyssa, Lilliana “Lilly” and Jakob; brothers: James E. Anderson (Noel) of Wellington, FL, Craig L. Anderson (Kile Martz) of Gays Mills, WI, and Drew D. Anderson of Dallas; and many nieces, nephews and cousins. He was preceded in death by his son, Fredrick Wood Anderson, and his parents. A Celebration of Life service will be held at 4:00pm, Monday, November 29, 2021, at First United Methodist Church, 1200 E. Yellow Jacket Lane, Rockwall, TX 75087. Visitation will be held Monday afternoon at the church, prior to the service, beginning at 3:00pm. The family has requested that in lieu of flowers, anyone wishing to honor Woody consider a gift to Patriot PAWS Service Dogs, 254 Ranch Trail, Rockwall, Texas 75032 or www.patriotpaws.org, or to the charity of his or her choice. The service will also be live-streamed. Please visit HTTP://fumcrockwall.online.church

The family of Heath Wood "Woody" Anderson created this Life Tributes page to make it easy to share your memories.

Heath Wood “Woody” Anderson passed away at his home on November...